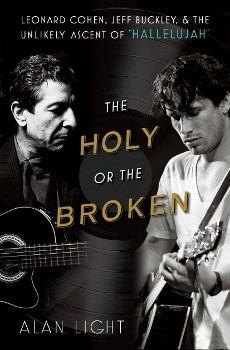 Book Reading by Alan Light, with a Live Performance of “Hallelujah” by the Guggenheim Grotto

Through in-depth interviews with its interpreters and the key figures who were actually there for its original recordings, Alan Light follows the unlikely journey of Cohen’s haunting and inscrutable song from obscurity to international anthem. The Holy or the Broken gives insight into how great songs come to be, how they are listened to, and how they can be forever reinterpreted.

St. Ann & the Holy Trinity Church is the site of a memorable 1991 career-making performance of “Hallelujah” by Jeff Buckley at a tribute concert for his father called “Greetings from Tim Buckley.” In 1994, Jeff Buckley recorded what is arguably the definitive version of the song.

The reading will begin with a live performance of “Hallelujah” by the Guggenheim Grotto, an Irish folk-pop group now based in Brooklyn.

First recorded in 1984, “Hallelujah” is now a pop culture staple, covered by hundreds of artists including Bob Dylan, U2, Bon Jovi, k.d. lang, Justin Timberlake, Susan Boyle, and Celine Dion. It has been featured in movies and on television shows ranging from Shrek to The West Wing. It eventually became the go-to song in times of national tragedy, chosen by VH1 for its official post-9/11 tribute video, and most recently by The Voice in tribute to the victims of Sandy Hook.

Alan Light is a frequent contributor to the New York Times and Rolling Stone, and former editor-in-chief of Vibe and Spin magazines.

Copies of The Holy or the Broken will be available for purchase and signing at the reading.

A suggested donation of $10.00 is requested to help sustain the church and host timely community events.