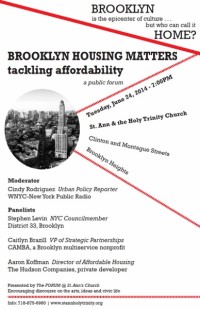 A Presentation of The Forum @ St. Ann’s

Brooklyn’s special character, cultural vibrancy, and quality of life have attracted global attention. With it has come dramatic and rapid change. Residents are seeing their neighborhoods change so fast that they hardly recognize their surroundings, often cannot benefit from improvements and feel shut out or alienated on their own turf.

What are we losing in the process? The key to it all is housing. As New York’s new mayor and developers pursue common ground on conflicting housing priorities, retaining the rich flavor and uniqueness of Brooklyn will be challenging.

Brooklyn Housing Matters: Tackling Affordability, a community forum, will be held in the church on Tuesday, June 24, 2014, at 7:00 pm. WNYC – New York Public Radio Urban Policy reporter Cindy Rodriguez will moderate the event, which will feature panelists Councilmember Stephen Levin, Caitlyn Brazill, VP of Strategic Partnerships of CAMBA, a Brooklyn multiservice nonprofit, and Aaron Koffman, Director of Affordable Housing of the Hudson Companies, a developer of new housing for all market segments in the metropolitan area.

The forum will take on housing issues and policies that affect Brooklynites today:

The event is part of a series by The Forum @ St. Ann’s, which seeks to engage the community in conversation about the arts, ideas and civic life. “Housing matters are on the minds of all Brooklyn residents. We are pleased to explore this urgent topic with guests who are asking the hard questions about the future of our beloved borough,” said the Rev. John E. Denaro, Rector of St. Ann & the Holy Trinity Church.

Councilmember Stephen Levin represents the 33rd Council District in Brooklyn, which includes some of the fastest developing neighborhoods in Brooklyn.  He chairs the General Welfare committee and is a member of the Land Use committee and has supported policies that increase the development of new affordable housing and allocated capital dollars to affordable projects in Greenpoint and Downtown Brooklyn.

Aaron Koffman manages affordable housing and assists in site acquisition for the Hudson Companies and is working on several new projects in the pipeline.  Prior to joining Hudson, Aaron worked at Forest City Ratner Companies where he focused on the residential portfolio within Atlantic Yards and site sourcing for mixed-income housing developments.

Cindy Rodriguez, Moderator, is heard on WNYC – New York Public Radio. She reports in-depth on homelessness, neighborhood violence and more recently the impact of Sandy on poor communities in flood damaged areas.  She’s won the Associated Press’ Best Enterprise Reporting award twice – most recently in 2010 for a story that exposed unscrupulous landlords taking advantage of people living on the margins and desperate for a place to live.

The Forum @ St. Ann’s is also presenting an exhibition in the church entitled “Raising the Dead,” on view through July 6. The exhibition includes sculptures by Sandra Osip and paintings by Douglas James. Osip’s arresting works of derelict, graffiti-tagged houses in Detroit are directly related to Brooklyn’s own housing history, which underscores the issues to be discussed at Brooklyn Housing Matters: Tackling Affordability.