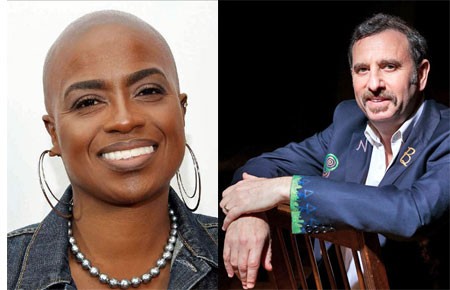 Singer Marcelle Davies-Lashley and singer/songwriter Nick Balaban performed an Independence Day set Thursday, July 2, at the weekly Summer Concert Music Series of St. Ann & the Holy Trinity Church. The 5:30 pm concert takes place in the garden on Clinton Street, next to the church entrance at Clinton and Montague Streets in Brooklyn Heights. The free 30-minute concerts feature musicians performing every Thursday in different genres. Passersby are invited to listen from the sidewalk while keeping safe social distance.

Born to West African parents, Davies-Lashley began performing in her church choir at the age of 5 and never stopped. A gospel singer, fusing classical, jazz, and 1970s soul, she has traveled and performed on five continents. She toured Paris and Turkey with Craig Harris and the Nation of Imagination and played the Queen of Sheba in the national and international tour of Robert Wilson’s opera The Temptation to rave reviews.

Nick Balaban is a Brooklyn musician, composer, singer/songwriter who plays piano and keyboard. He has performed many types of music with myriad artists including Ray Charles, Patti LaBelle, Macy Gray, The Persuasions, and James Taylor.

Davies-Lashley delivered a bravura performance in Theater of War Productions’ 10-week run of Antigone in Ferguson in the church sanctuary in 2019. She and Balaban were featured performers last fall at St. Ann’s parish gala, Gather In.