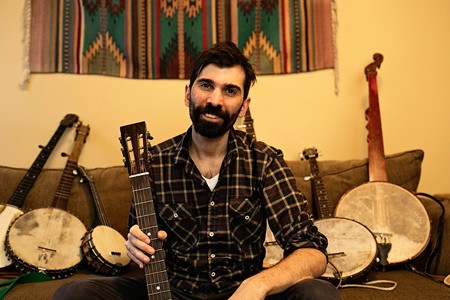 Eli Smith, banjo player and co-organizer of the Brooklyn Folk Festival, will kick off St. Ann and the Holy Trinity Church’s new weekly Summer Music Concert Series on Thursday, June 18, at 5:30 pm. The 30-minute concert will be held in the Peace Garden on Clinton Street, beside the church entrance at Montague and Clinton Streets in Brooklyn Heights. The series will feature musicians performing every Thursday in different genres that are set in the church’s newly landscaped garden. Passersby are invited to listen from the sidewalk while keeping safe social distance.

Eli Smith is a singer, banjo player and guitarist who grew up in New York’s Greenwich Village. Smith has recorded for Smithsonian Folkways Recordings and regularly performs as a solo musician and with the string band the Down Hill Strugglers. He is also a music producer, currently heading the annual Brooklyn Folk Festival and Washington Square Park Folk Festival. St. Ann and the Holy Trinity Church has hosted the Brooklyn Folk Festival for the past five years. This year, the festival was postponed and is scheduled for November 6-8, 2020.

Smith is also the co-director of Jalopy Records, the record label of the Jalopy Theatre, and is the host of the podcast Down Home Radio, available at www.DownHomeRadioShow.com. He has performed and recorded with John Cohen (New Lost City Ramblers) and Peter Stampfel (The Holy Modal Rounders and The Fugs), and has opened for songwriters Patti Smith and Steve Earle. Smith has performed at festivals and venues including the Kennedy Center, Library of Congress, Newport Folk Festival, Vancouver Folk Festival, The Jalopy Theatre and many more.

St. Ann’s offers the weekly music-making in hopes it will provide a balm for a city of people on edge in the midst of continued uncertainty. The concerts will be recorded and posted on the parish website for all who cannot attend to enjoy. Everyone is invited.