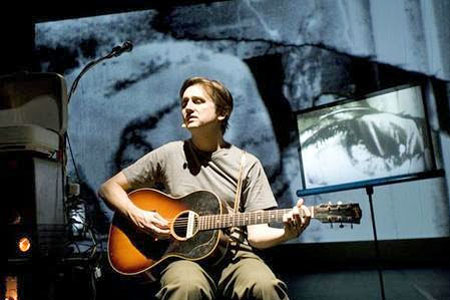 The Rev. Chris Lee performed at St. Ann’s weekly Summer Music Concert Series on Thursday, July 30, 2020. The concerts are held in the Peace Garden on Clinton Street, beside the church entrance at Montague and Clinton Streets in Brooklyn Heights. Musicians perform 30-minute sets in the newly landscaped garden for an audience of passersby invited to listen from the sidewalk while keeping safe social distance.

Before pursuing a call to ordained ministry in the Episcopal Church, the Rev. Alan Christopher Lee worked as a singer and musician in his native North Carolina and in Brooklyn. With his primary collaborator, Sonic Youth drummer Steve Shelley, he released four albums, which blend folk-rock, post-punk and blue-eyed soul. He has performed across the United States and Europe, and at festivals such as All Tomorrow’s Parties and South by Southwest. Chris was called “one of the most distinctive voices in indie rock” by Rolling Stone and “NYC rock’s best kept secret” by Time Out New York. From 2005-2010, he performed in the experimental theater piece Red Fly/Blue Bottle, which premiered at HERE Arts Center in New York, and toured to France and the Netherlands. His Summer Music Concert program includes a mix of songs, including some of his own.

Under the tutelage of Dr. Julian Wachner (Trinity Church Wall Street), Chris is currently developing new music for the church that brings his previous work to bear on traditional Anglican liturgy. His setting for Compline was performed at the General Theological Seminary in Manhattan in Spring 2019.

St Ann & the Holy Trinity Church and Pro-Cathedral offers the weekly music-making series as a balm for a city of people on edge in the midst of continued uncertainty.