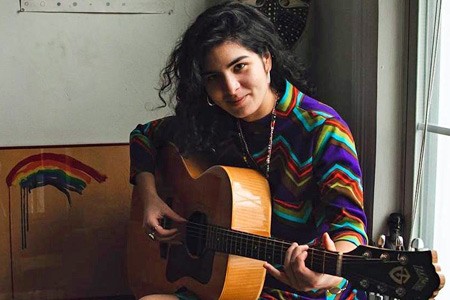 Miriam Elhajli, a Venezuelan-Moroccan-American composer and vocalist, performed at St. Ann & the Holy Trinity’s weekly Summer Music Concert Series on Thursday, August 20, 5:30-6:00 pm. The concerts are held in the Peace Garden on Clinton Street, beside the church entrance at Montague and Clinton Streets in Brooklyn Heights. Musicians perform 30-minute sets in the newly landscaped garden for an audience of passersby invited to listen from the sidewalk while keeping safe social distance.

Miriam Elhajli’s work is influenced strongly by the folkloric music of South and North America, modern jazz, and contemporary classical music. A graduate of Berklee College of Music, Elhajli currently lives in Brooklyn and works as a researcher at The Association for Cultural Equity founded by Alan Lomax. She has performed at musical venues throughout New York City, including the Brooklyn Folk Festival. Elhajli’s debut LP, “Observations,” is set to be released this spring on Numina Records.

St Ann & the Holy Trinity Church and Pro-Cathedral offers the weekly music-making series as a balm for a city of people on edge in the midst of continued uncertainty.