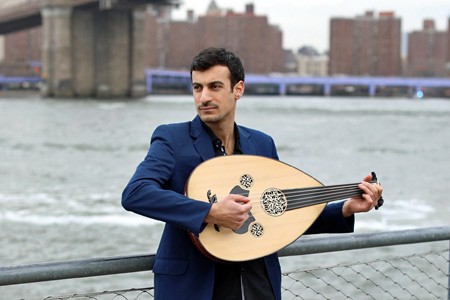 Raffi Joe Wartanian, a musician, writer, performed at St. Ann’s final weekly Summer Music Concert Series on Thursday, September 3, 5:30-6:00 pm. The concerts were held in the Peace Garden on Clinton Street, beside the church entrance at Montague and Clinton Streets in Brooklyn Heights. Musicians performed 30-minute sets in the newly landscaped garden for an audience of passersby invited to listen from the sidewalk while keeping safe social distance.

In addition to being a musician and writer, Raffi Joe Wartanian is an educator passionate about social justice, creativity, and innovative institutions. He recently released Critical Distance, an album of ten instrumental compositions on guitar, oud, and mandolin. Raffi is the grandson and great-grandson of Armenia Genocide survivors, and the son of Armenian parents from Beirut. Thanks to his family, community, and the generosity of his oud teachers Ara Dinkjian and Mihran Demirchyan, Raffi has learned from the rich repertoire of Armenian folk music. He currently teaches undergraduate writing at Columbia University, and his essays have appeared in The New York Times, Miami Herald, The Baltimore Sun, and elsewhere. www.raffijoewartanian.com.

St Ann & the Holy Trinity Church and Pro-Cathedral offered the weekly music-making series as a balm for a city of people on edge in the midst of continued uncertainty.