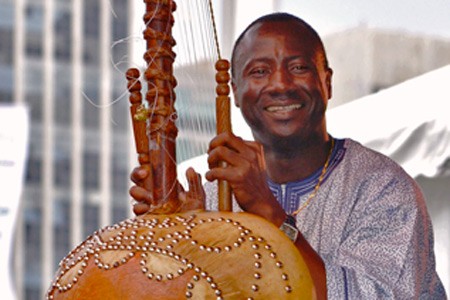 Yacouba Sissoko, Master kora player, performed at St. Ann & the Holy Trinity’s weekly Summer Music Concert Series on Thursday, July 9. The 5:30 pm concerts are held in the Peace Garden on Clinton Street, beside the church entrance at Montague and Clinton Streets in Brooklyn Heights. Musicians perform 30-minute sets in the newly landscaped garden for an audience of passersby invited to listen from the sidewalk while keeping safe social distance.

Yacouba Sissoko was born in Kita, Mali, to a well-known djely family. Djelys for centuries they have been the traditional musicians and keepers of the factual history and fables of past rulers, nobles, social groups and families. The kora was the traditional instrument that djelys played.

At the age of 9, Yacouba started learning the kora and the oral traditions associated with it from his grandfather until he moved to Bamako, Mali’s capital, to attend the National Institute of the Arts. Based in the capital, he caught the attention of the music world and began touring with noted international African artists which eventually led him to settle in the United States in 1998.

With an intention to introduce and share the stories of his people but also to learn from other musicians and cultures, Yacouba incorporates a variety of musical influences into his repertoire, and as such has developed his own unique style of kora. He performed, toured and recorded with well-known African musicians such as Baaba Maal, Sekou (Bambino) Diabate and Kerfala Kante. Yacouba, not limited to African music has also recorded and performed with a variety of artists including Harry Belafonte, Paul Simon, and Lauren Hill. He has recorded tracks on over 15 CDs.

Yacouba continues to blend effortlessly with other musical styles, whether it is performing Indian ragas or Appalachian tunes. Yacouba can be seen regularly touring with Regina Carter, Rachel Brown, Jordana de Lovely, Oran Etkin, Kavita Shah, Benyoro and his own band SIYA. His first solo CD SIYA was released in 2017.

Rooted to give back to the community, Yacouba regularly performs for cultural programs and benefit concerts. In recognition of his commitment to educating others in 2007, he was selected as a Teaching Artist by the Weill Music Institute at Carnegie Hall and returned again to Carnegie Hall in 2016 and 2019 as a featured artist in the Musical Explorers Program in New York, New York and Savannah, Georgia. He also received a Sunshine Award for Performing Arts, African Music in 2016.