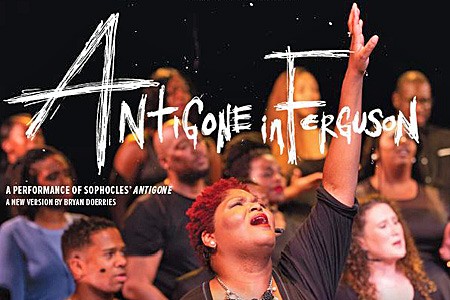 Antigone in Ferguson
10 week run. All 50 performances are FREE.

A Performance of Sophocles’ ANTIGONE
Translated, Directed, and Facilitated by Bryan Doerries
Music composed and conducted by Phil Woodmore

St. Ann & the Holy Trinity Church is pleased announce that Theater of War Productions will be in residence at St. Ann & the Holy this spring and early summer. The company will present 50 free performance of Antigone in Ferguson in the church sanctuary from May 8 to July 13, 2019.

Antigone in Ferguson was conceived in the wake of Michael Brown’s death in 2014, through a collaboration between Theater of War Productions and community members from Ferguson, Missouri. Translated and directed by Theater of War Productions Artistic Director Bryan Doerries and composed by Phil Woodmore, the project fuses a dramatic reading by leading actors of excerpts from Sophocles’ Greek tragedy with live choral music performed by a choir of activists, police officers, youth, and concerned citizens from Ferguson and New York City. The performance is the catalyst for panel and audience-driven discussions about racialized violence, structural oppression, misogyny, gender violence, and social justice, which serve as the core component of the event.

“Distills the Greek tragedy as a commentary on the urgent questions…resulting from the death of Michael Brown.” Tim Teeman, The Daily Beast

Hosted by St. Ann & the Holy Trinity Church and presented in association with THE OFFICE performing arts + film. Antigone in Ferguson is made possible with the exclusive support of the Stavros Niarchos Foundation.