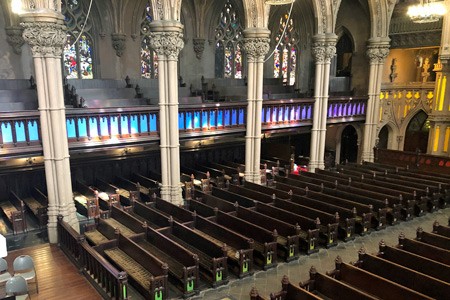 The Forum @ St. Ann’s will present an installation of original art by artist and parishioner Ben Cowan, “Journey of Small Shifts,” to be exhibited during the season of Lent (March 6-April 19, 2019). The exhibition consists of hundreds of custom cut, hand painted paper panels placed in architectural nooks throughout the sanctuary of historic St. Ann & the Holy Trinity Church. The panels create a wash of color that interacts with the vibrant light from the church’s famous William Jay Bolton stained glass windows. There will be an artist’s reception on Saturday, March 9, 2019, 4:00-6:00 pm.

Ben Cowan was born and raised in Ann Arbor, Mich. He received a BFA from the School of the Art Institute of Chicago and an MFA from Indiana University. Cowan held a residency in Umbria, Italy, that deeply influenced his paintings. Since then, the landscape and character of his surroundings has remained the energizing force in his work. The artist currently lives and works in Brooklyn, New York. His work captures the familiar sights of his neighborhood using cropped, collaged and simplified vistas to capture a concentrated experience that refers to both the interpersonal and the supernatural.

Cowan’s work has been shown in solo and group shows throughout the United States including New York City’s W83 Gallery. He has been featured in Manifest Gallery’s International Painting Annual, Fresh Paint Magazine, The Wall Street Journal and was mentioned in Vice Magazine’s Creators Project. Cowan’s work is in private and public collections including the Ann Arbor District Library in Michigan, The Racquet Club of Chicago and the Renwick Hotel and Moxy Downtown Hotel in New York City.

Ben documented the process of installation on Instagram @benbencowan. Other photos of Ben at work in the sanctuary are included in this album.