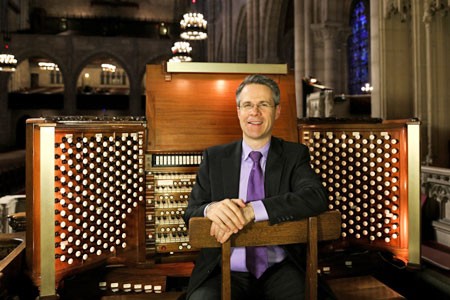 Chris Creaghan is currently Associate Organist for The Riverside Church where he plays throughout the year, accompanies the Riverside Choir, and collaborates with the administration of the music program. In addition, he is the Organist and Choir Director for Temple Israel of New Rochelle. Mr. Creaghan has also appeared often performing large-scale choral accompaniments with many of New York’s choral organizations including he Collegiate Chorale, The New York Virtuoso Singers, The Stonewall Chorale, and The Dessoff Choirs. He has played at the Berkshire Choral Festival, and with the American Symphony Orchestra at the Bard Music Festival as well as at Carnegie Hall. He has toured Eastern Europe with The Canticum Novum Singers. Performances with orchestra have included concertos by Poulenc and Handel, and he has been a featured artist with Musica Viva performing Rheinberger’s Concerto in F Major. He has premiered works by Pamela Decker, Bruce Neswick, Gerre Hancock, Stephen Paulus, and Iain Quinn.

Chris Creaghan is a graduate of the Manhattan School of Music where he studied with renowned organist and composer McNeil Robinson and whose works he often performs. An active member of the American Guild of Organists for many years, he is a past Dean of the New York City Chapter. A native of Canada, he has recorded for the Canadian Broadcasting Corporation. He is married to composer and mezzo-soprano Nancy Wertsch.

Join us also at the following upcoming organ concerts of the series:

April 7, 2020
Michał Szostak
Music by Bach, Vierne and an Improvisation