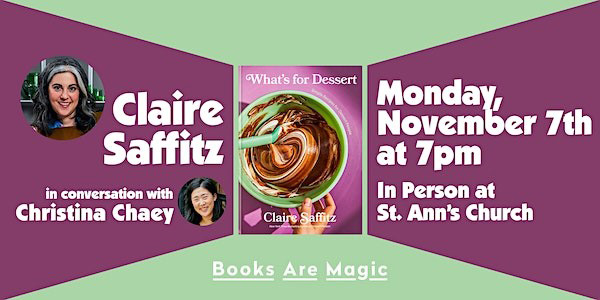 A love letter to dessert by the New York Times bestselling author of Dessert Person.

Claire Saffitz returns with 100 recipes for all dessert people—whether you’re into impressive-yet-easy molten lava cakes, comforting rice pudding, or decadent chestnut brownies. In this all-new collection, Claire shares recipes for icebox cakes, pies, cobblers, custards, cookies and more, all crafted to be as streamlined as possible. (No stand mixer? No problem! You won’t need one.) To keep the recipes straightforward and simple, Claire makes sure each recipe is extra efficient, whether you’re making a Whipped Tres Leches Cake with Hazelnuts or Caramel Peanut Popcorn Bars.

Fans will find all the warmth, encouragement, and deliciously foolproof recipes with loads of troubleshooting advice that they’ve come to count on from Claire.

Claire Saffitz is the bestselling author of Dessert Person and host of the cookbook companion YouTube series Dessert Person. After graduating from Harvard University, she received a master’s degree in culinary history from McGill in Montreal and then studied pastry in Paris at École Grégoire Ferrandi. She lives in New York City with her husband and two cats.

Christina Chaey is a recipe developer, writer, and editor. Most recently, she was a senior food editor at Bon Appétit, where she spent her days in the BA Test Kitchen dreaming up recipes for home cooks. While at Bon Appétit, she also starred in popular video series on the brand’s YouTube channel such as “From the Test Kitchen” and “Making Perfect: Thanksgiving”, wrote and edited features for the magazine, and was a guest star on the podcast. When Christina isn’t developing recipes, she’s riding all around NYC on her bike, experimenting with sourdough, or arms-deep in the best produce of the moment at the greenmarket. She lives in Brooklyn.