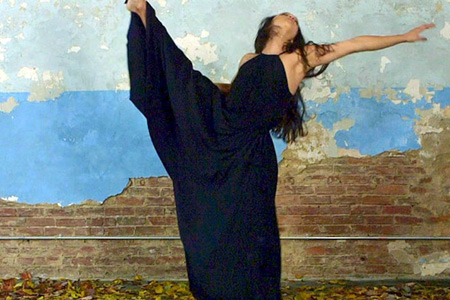 The Forum @ St. Ann’s will again partner with I.D.A., a dance, sound, and performance collective, which will perform an Earth Day event, “Embodied Activism,” outside the church. The event will feature Isabel Umali (dance), Dustin Carlson (music), and Ashley Menestrina (dance. I.D.A., and four invited musicians and performers, will present “Embodied Activism,” a sensorial experience focusing on healing, re-birth, human-to-human connection, and environmental justice. The site-specific participatory performance will take place in three outdoor locations on Montague and Clinton Streets around St. Ann & the Holy Trinity Church, which is located at 157 Montague Street. The event is free and open to the public. It is hosted by the Forum @ St. Ann’s, a cultural program of St. Ann’s and an arts partner of I.D.A. Plan to join us and invite a friend!

Ashley Menestrina is a freelance artist performing her own work around the world. Her work has been seen at David Rubinstein Atrium at Lincoln Center, The Martha Graham Theater, Battery Dance Festival in New York City and abroad in Los Angeles, Turkey, Mexico City, Portugal, and Jerusalem.

Isabel Umali is a New York City-based dance artist, working across mediums including contemporary dance, dance for film, live collaborations with musicians and visual artists, dance theater, immersive theater, and modeling. As a creator, Isabel has collaborated with musicians and visual artists and her work has been shown and performed nationally and internationally.

Dustin Carlson is a Brooklyn-based guitarist whose work reflects a deep fascination with time, music, physical movement, soul, and culture. He works with Dancers/Choreographers Isabel Umali and Ashley Menestrina in IDA.