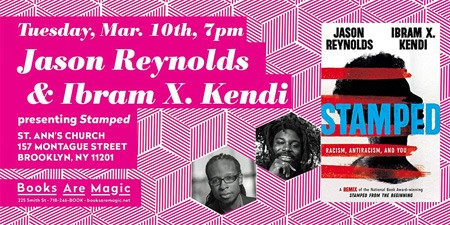 by Books are Magic

A timely, crucial, and empowering exploration of racism—and antiracism—in America

This is NOT a history book.

This is a book about the here and now.

A book to help us better understand why we are where we are.

A book about race.

The construct of race has always been used to gain and keep power, to create dynamics that separate and silence. This remarkable reimagining of Dr. Ibram X. Kendi’s National Book Award-winning Stamped from the Beginning reveals the history of racist ideas in America, and inspires hope for an antiracist future. It takes you on a race journey from then to now, shows you why we feel how we feel, and why the poison of racism lingers. It also proves that while racist ideas have always been easy to fabricate and distribute, they can also be discredited.

Through a gripping, fast-paced, and energizing narrative written by beloved award-winner Jason Reynolds, this book shines a light on the many insidious forms of racist ideas–and on ways readers can identify and stamp out racist thoughts in their daily lives.

Jason Reynolds is the New York Times bestselling author of many books, including When I Was the Greatest, Boy in the Black Suit, All American Boys (cowritten with Brendan Kiely), As Brave as You, For Every One, the Track series (Ghost, Patina, Sunny, and Lu), Long Way Down, and Look Both Ways. He is a National Book Award finalist; the recipient of a Newbery Honor, a Printz Honor, and multiple Coretta Scott King Honors; and the winner of a Kirkus Prize, two Walter Dean Myers Awards, and an NAACP Image Award, among other honors. He lives in Washington, D.C and invites you to visit him online at JasonWritesBooks.com.

Ibram X. Kendi is the New York Times bestselling author of Stamped from the Beginning, which won the National Book Award for Nonfiction, The Black Campus Movement, which won the W.E.B. Du Bois Book Prize, and How to be an Antiracist. He is a professor of history and international relations and the founding director of the Antiracist Research and Policy Center at American University. One of America’s leading antiracist voices and a frequent public speaker, Dr. Kendi is also a columnist at The Atlantic. He lives with his family in Washington, D.C. He invites you to visit him online at IbramXKendi.com.