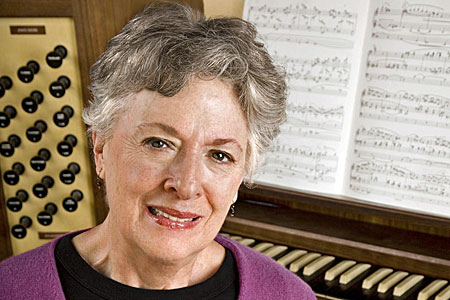 Judith Hancock will present the third in St. Ann & the Holy Trinity Church’s First Tuesday One O’Clock Concert series with music by Karg-Elert, Dupré, Manz and Near.

Judith Hancock is one of America’s leading concert organists. She served for many years as Associate Organist of Saint Thomas Church Fifth Avenue in New York, where she assisted in training and conducting the Saint Thomas Choir. Formerly Organist and Director of Music at Saint James’s Church Madison Avenue, New York, and the Church of Saint James the Less in Scarsdale, New York, she directed the music programs in both locations, introducing many new ideas, both musical and liturgical. She has also held positions of Organist and Choirmaster at the Episcopal Church of the Redeemer, Cincinnati, and at churches in Bronxville, New York, and in Durham, North Carolina.

A graduate of Syracuse University, Dr. Hancock studied organ with the legendary teacher Arthur Poister. From there she went on to Union Theological Seminary in New York City, where she earned the Sacred Music Master’s degree, and from which she received the Unitas Distinguished Alumnus Award. In 2004, Judith Hancock was awarded the degree of Doctor of Sacred Music by St. Dunstan’s College of Sacred Music, Providence, Rhode Island. Her organ studies in New York with Charlotte Garden and Jack Ossewaarde. She has more recently studied with David Craighead and David Higgs at the Eastman School of Music. Dr. Hancock has played many recitals throughout the United States and abroad. She currently resides in New York City.


April 7, 2020
Michał Szostak
Music by Back, Vierne and an Improvisation