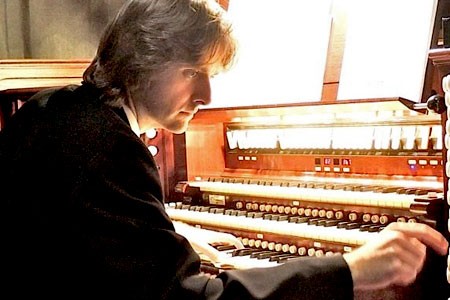 Kalle Toivio will present the second in St. Ann & the Holy Trinity Church’s First Tuesday One O’Clock Concert series with music by the German romantic composer Juilius Reubke and will also improvise on submitted themes.

Dr. Kalle Toivio is an Finnish-American virtuoso concert organist pianist living in New York City. He is the winner of the First Prize at the prestigious American Guild of Organists National Competition in Organ Improvisation held in conjuction with the 2018 AGO National Convention in Kansas City, Missouri. The Debut CD-Album of Kalle Toivio will be released in the Fall of 2019 by the Pro Organo-Naxos label.

Kalle Toivio has played recitals at the Myra Hess Memorial Concert Series in Chicago, Carnegie Hall, Cathedral of St. John the Divine in New York, Central Lutheran Church in Minneapolis and Kennedy Center in Washington D.C. In the Summer of 2019 he had an extensive tour in Finland and Sweden which included recitals at the Turku and Helsinki Cathedrals, Mänttä Music Festival, Lahti Organ Festival, and a recital in Mörrum, Sweden.

Kalle Toivio is the Organist and Director of Music at the Church of Notre Dame in New York. He is on the organ faculty of Manhattan School of Music Precollege and is the founder and Sub-Dean of the Finland Chapter of the American Guild of Organists. A graduate of the Sibelius Academy with Music of Master degrees in Piano Performance and Church Music, Dr. Toivio received his Master of Music and Doctor of Musical Arts degrees in Organ Performance from the Manhattan School of Music. He is married to concert pianist and actress Viktoriya Papayani.

December 3, 2019
Judith Hancock
Music by Karg-Elert, Dupré, Manz and Near

April 7, 2020
Michał Szostak
Music by Back, Vierne and an Improvisation