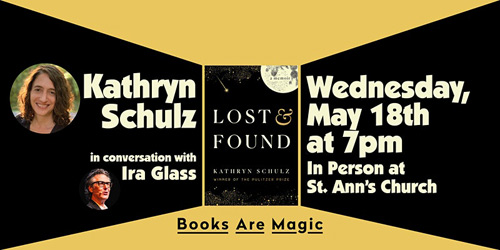 “An extraordinary gift of a book, a tender, searching meditation on love and loss and what it means to be human. I wept at it, laughed with it, was entirely fascinated by it. I emerged feeling as if the world around me had been made anew.”—Helen Macdonald, author of H Is for Hawk and Vesper Flights

Eighteen months before Kathryn Schulz’s father died, she met the woman she would marry. In Lost & Found, she weaves the story of those relationships into a brilliant exploration of the role that loss and discovery play in all of our lives. The resulting book is part memoir, part guidebook to living in a world that is simultaneously full of wonder and joy and wretchedness and suffering—a world that always demands both our gratitude and our grief.

A staff writer at The New Yorker and winner of the Pulitzer Prize, Schulz writes with curiosity, tenderness, erudition, and wit about our finite yet infinitely complicated lives. Lost & Found is an enduring account of love in all its many forms from one of the great writers of our time.

Ira Glass is the host and creator of the public radio program This American Life. The show is heard each week by over 2 million listeners on more than 500 public radio stations, with another 2.3 million downloading each podcast. The show’s won all sorts of awards, including the very first Pulitzer Prize ever given to a radio show or podcast.