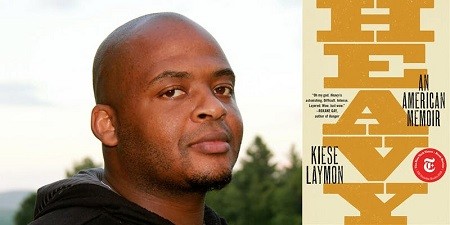 Books Are Magic is proud to present Kiese Laymon to speak about his book, Heavy: An American Memoir at St. Ann’s Church!

In this powerful, provocative, and universally lauded memoir—winner of the Andrew Carnegie Medal and finalist for the Kirkus Prize—genre-bending essayist and novelist Kiese Laymon “provocatively meditates on his trauma growing up as a black man, and in turn crafts an essential polemic against American moral rot” (Entertainment Weekly).

In Heavy, Laymon writes eloquently and honestly about growing up a hard-headed black son to a complicated and brilliant black mother in Jackson, Mississippi. From his early experiences of sexual violence, to his suspension from college, to time in New York as a college professor, Laymon charts his complex relationship with his mother, grandmother, anorexia, obesity, sex, writing, and ultimately gambling. Heavy is a “gorgeous, gutting…generous” (The New York Times) memoir that combines personal stories with piercing intellect to reflect both on the strife of American society and on Laymon’s experiences with abuse. By attempting to name secrets and lies he and his mother spent a lifetime avoiding, he asks us to confront the terrifying possibility that few in this nation actually know how to responsibly love, and even fewer want to live under the weight of actually becoming free.

“A book for people who appreciated Roxane Gay’s memoir Hunger” (Milwaukee Journal Sentinel), Heavy is defiant yet vulnerable, an insightful, often comical exploration of weight, identity, art, friendship, and family through years of haunting implosions and long reverberations. “You won’t be able to put [this memoir] down…It is packed with reminders of how black dreams get skewed and deferred, yet are also pregnant with the possibility that a kind of redemption may lie in intimate grappling with black realities” (The Atlantic).

KIESE LAYMON is a black southern writer, born and raised in Jackson, Mississippi. He is currently a Professor of English and Creative Writing at the University of Mississippi. Laymon attended Millsaps College and Jackson State University before graduating from Oberlin College. He earned an MFA in Fiction from Indiana University. He is the author of the award-winning novel, Long Division and a collection of essays, How to Slowly Kill Yourself and Others in America. Laymon has written for numerous publications including the New York Times, NPR, the Los Angeles Times, Esquire, The Guardian, McSweeneys, Colorlines, The Best American Series, Ebony, and many others. He is a contributing editor of Oxford American.

ANDRÉ HOLLAND continues to break down barriers with a multitude of critically acclaimed and diverse roles. Holland recently finished his run as the title role of Othello alongside Academy Award and Tony Award winning actor Mark Rylance at Shakespeare’s Globe Theatre in London. He was also seen in the JJ Abrams Hulu series, “Castle Rock.” The Stephen King inspired series enjoyed success from both critics and fans. Holland’s credits include starring roles in the Barry Jenkins film MOONLIGHT which won the Academy Award for Best Picture, the civil rights film by Ava DuVernay SELMA, which was nominated for an Academy Award for Best Picture, A WRINKLE IN TIME with Oprah Winfrey, Reese Witherspoon and Mindy Kaling, 42 opposite Chadwick Boseman, the World War II drama MIRACLE AT ST. ANNA and the dependent film SUGAR. Holland originally worked with Soderbergh for the series “The Knick” in which he worked opposite Clive Owen. Originally from Alabama, Holland currently resides in New York City.