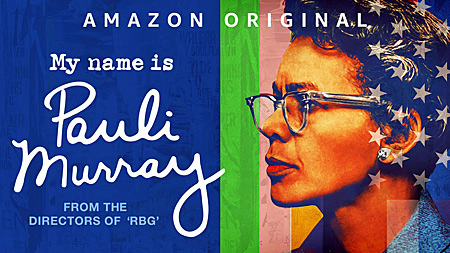 On Sunday, June 12, at 1:00 pm, St. Ann’s will host a screening in St. Ann’s sanctuary of a new documentary about a significantly accomplished person hailed as the first Black woman to be ordained in the Episcopal Church. Overlooked by history, Pauli Murray was a legal trailblazer whose ideas influenced Ruth Bader Ginsburg’s fight for gender equality and Thurgood Marshall’s civil rights arguments. The film is a portrait of Murray’s impact as a non-binary Black luminary: lawyer, activist, poet and priest who transformed our world.

The screening will be followed immediately by a panel discussion at 2:30 pm that can be viewed online. The panel will be moderated by the Rev. Marie Tatro, Vicar for Community Justice Ministry for the Episcopal Diocese of Long Island and feature Julie Cohen, who directed the film with Betsy West, the Rev. Kit Wang, Priest-in-Charge of Trinity Church in Hampton, New Hampshire and New York City-based trans activist Qween Jean.

Cohen, who will join us in person, was nominated for an Academy Award for directing RBG about Supreme Court Justice Ruth Bader Ginsberg, also with West. The pair’s next film, Gabby Giffords Won’t Back Down, will be released this summer. Previously, Julie worked as a staff producer for NBC News and holds a master’s degree from Yale Law School. Wang was ordained in the Episcopal Diocese of Maine in 2008 and is the first trans priest called to serve his parish. He has served on the board of AIDS Response Seacoast, Diocese of Maine Commission on Ministry, and is currently a member of the Joint Nominating Committee for the Election of the Presiding Bishop, as well as on the steering committee of TransEpiscopal. Wang will appear on the panel remotely from his home.

Qween Jean is a Haitian-American costume designer whose credits include over fifty major shows in New York City and nationally. In 2020, she founded Black Trans Liberation, an organization that aims to provide access and employment resources for the Trans Gender Non-Conforming (TGNC) community. In 2021, she was named an Artist-in-Residence at MOMA PS1, where she curated Memoriam and Deliverance, an installation about transphobic violence. Qween is featured in Live Pridefully: Love and Resilience within Pandemics, an interdisciplinary exhibit organized by the Caribbean Equality Project that highlights the bias and violence against queer and trans individuals while also celebrating their lives, on view this spring at the Queens Museum and now currently through Photoville in Brooklyn Bridge Park.