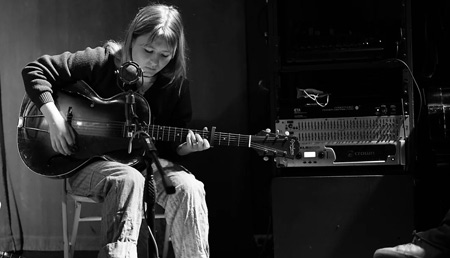 Nora Brown returns with her third full-length album, Long Time To Be Gone (out 8/26 on Jalopy Records). Recorded at the historic St. Ann’s Church in Brooklyn Heights, this mesmerizing collection of traditional tunes and songs follows her performance on NPR’s Tiny Desk Concert series, where she was lauded for bringing “incredible, surprising depth to the Appalachian music she plays”; and 2021’s Sidetrack My Engine, which debuted at #6 on the Billboard Bluegrass Chart.

“I recorded my last project in an underground tunnel,” says Brown, “but this time we were working in a cavernous church, which allowed us to really experiment with all the sounds that different locations in the sanctuary and different mic configurations could produce. When you listen, you can hear the expanse of the space pretty clearly, which was really important to our approach on these recordings.”

This album offers a snapshot of a remarkable young artist, showcasing both her instrumental abilities and her poignant, understated vocal delivery. The songs draw on the lived experiences of a broad swath of Americans, keeping their stories and spirits alive with reverence and vitality. Brown plays a variety of unique instruments on the record, too, including an 1888 Luscomb banjo owned by her great-great-grandfather, a fretless tack head banjo built by her dad, and an historic 5-string banjo that belonged to one of her mentors, New Lost City Ramblers member John Cohen (the instrument was played by Roscoe Halcomb on his iconic High Lonesome Sound album and is now in the permanent collection of the Library of Congress).

Born and raised in Brooklyn, Brown first began learning stringed instruments at the age of six from the late Shlomo Pestcoe, who instilled a belief that music is meant to be shared. In the decade to come, she would go on study with old-time masters like Cohen, Lee Sexton, and George Gibson, win numerous banjo and folk song competitions around the country, and have her work featured everywhere from NPR’s All Songs Considered to WNYC’s Dolly Parton’s America. Brown made her Billboard Bluegrass Chart debut in 2019, hitting #7 with her first album, Cinnamon Tree, and followed it up in 2021 with the critically acclaimed Sidetrack My Engine, which American Songwriter proclaimed to be “an exhibit of sonic heirlooms carefully amended to meet a modern moment with vintage elegance.

Beer and wine will be available at the event.