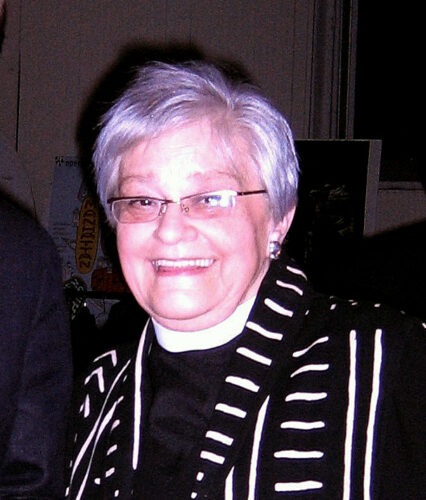 It is with the greatest sadness that we report the death of the Rev. Angela V. Askew, beloved former Priest-in-Charge of St. Ann & the Holy Trinity Church, on Thursday, July 22, 2021, following a prolonged illness. A funeral service for Mother Askew will be held in St. Ann’s on Wednesday, July 28, 2021, at 10:00 am. All are welcome to attend.

Mo. Askew came to St. Ann’s as Interim Pastor in 2003 and was later appointed as Priest-in-Charge by Bishop Orris G. Walker. Leaders and parishioners who worked with her describe her as bringing a prayerful peace and sense of humor to her ministry at a challenging time for the parish. Mo. Askew retired in 2010.

Born in Kettering, Northamptonshire, England, Mo. Askew studied Latin, French and post-war economics in London. A priest, scholar and teacher, she worked in Italy as a translator and educator and at the Church of St. Paul’s Within-the-Walls in Rome. She was ordained deacon in 1978 at St. James’s Episcopal Church in Florence by then-Presiding Bishop John Allin, and ordained priest on September 19, 1980, at Union Theological Seminary by the late Rt. Rev. John Krumm, Suffragan for the Convocation of Episcopal Churches in Europe.