Ruch Reichl: Save Me the Plums 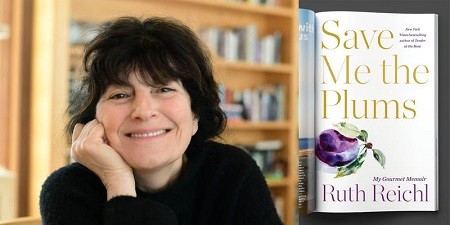 Join Ruth Reichl and Books Are Magic as we celebrate her new memoir, Save Me the Plums at St. Ann’s Church!

Trailblazing food writer and beloved restaurant critic Ruth Reichl took the job (and the risk) of a lifetime when she entered the glamorous, high-stakes world of magazine publishing. Now, for the first time, she chronicles her groundbreaking tenure as editor in chief of Gourmet, during which she spearheaded a revolution in the way we think about food.

When Condé Nast offered Ruth Reichl the top position at America’s oldest epicurean magazine, she declined. She was a writer, not a manager, and had no inclination to be anyone’s boss. And yet…Reichl had been reading Gourmet since she was eight; it had inspired her career. How could she say no?

This is the story of a former Berkeley hippie entering the corporate world and worrying about losing her soul. It is the story of the moment restaurants became an important part of popular culture, a time when the rise of the farm-to-table movement changed, forever, the way we eat. Readers will meet legendary chefs like David Chang and Eric Ripert, idiosyncratic writers like David Foster Wallace, and a colorful group of editors and art directors who, under Reichl’s leadership, transformed stately Gourmet into a cutting-edge publication. This was the golden age of print media—the last spendthrift gasp before the Internet turned the magazine world upside down.

Complete with recipes, Save Me the Plums is a personal journey of a woman coming to terms with being in charge and making a mark, following a passion and holding on to her dreams—even when she ends up in a place she never expected to be.

Ruth Reichl is the bestselling author of the memoirs Tender at the Bone, Comfort Me with Apples, Garlic and Sapphires, and For You, Mom, Finally; the novel Delicious!; and, most recently, the cookbook My Kitchen Year. She was editor in chief of Gourmet magazine for ten years. Previously she was the restaurant critic for The New York Times and served as the food editor and restaurant critic for the Los Angeles Times. She has been honored with six James Beard Awards for her journalism, magazine feature writing, and criticism. She lives in upstate New York with her husband and two cats.