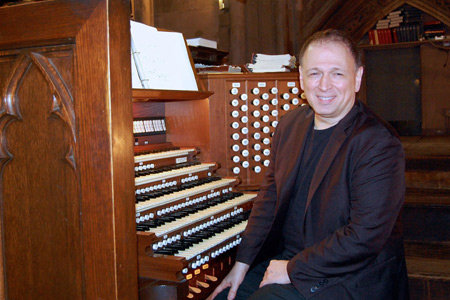 St. Ann & the Holy Trinity will again participate in the New York Landmarks Conservancy’s annual Sacred Sites Open House on Sunday, July 24, from 10:00 to 3:00 pm. Gregory D’Agostino, our music director, will perform a 30-minute organ recital at 12 noon. The Open House program celebrates the art, architecture, and history of houses of worship and holy sites throughout New York State. Please drop by for the concert and enjoy our historic church.

Reviews of Mr. D’Agostino’s performances have been unanimous in their praise. He creates a thrilling sense of drama described as a “stunning, controlled delirium” by The American Organist magazine. Principal New York Times critic Allan Kozinn wrote that Mr. D’Agostino “gave deft, powerful performances that got to the heart of the music, the gentle and songlike as well as the robust and purely dexterous;” and The Washington Post declared that his performance of the Poulenc Organ Concerto displayed “crushing power when needed, and sensitivity to the music’s dark, filmy atmospherics.”

Gregory D’Agostino has appeared on Public Radio International’s “Pipedreams,” National Public Radio’s “Performance Place,” “The Next Big Thing” and “Soundcheck,” NHK Japan National Television, Czech Television, and Radio Prague. He has been featured in the prestigious Japanese journals “Recording Art” and “Friends of Music” as well as in Japan’s national newspaper Mainichi Shimbun. A versatile artist, he has recorded for the Albany, Loft, Bridge, and Centaur labels, and his performances on film have been featured at the Guggenheim Museum in New York, Brooklyn Academy of Music (BAM), San Francisco Museum of Modern Art, and the Barbican Centre (London).

Possessing an unusually wide repertoire, Mr. D’Agostino performs from memory music of the baroque to the present, and is especially noted for his performances of Liszt and the French Romantics. As a champion of 20th century music, he has collaborated with composers including George Crumb, Milton Babbitt, Stephen Paulus, David Diamond, and Ned Rorem, and in recital he has often included his own transcriptions of jazz works by Chick Corea, David Brubeck, and Oscar Peterson. As a mentor of young organists, Mr. D’Agostino has taught throughout the east coast at various Pipe Organ Encounters (POEs), summer programs sponsored by the American Guild of Organists; he directed New York City’s first POE. For six years he served on the Executive Board of the New York AGO, and has been a juror for various Guild competitions, the Albert Schweitzer Festival, and the Koussevitsky Young Artist Award. He currently serves on the Executive Board of the Brooklyn AGO. A native of New York City, Mr. D’Agostino earned the Doctor of Musical Arts degree from The Juilliard School where he was first prize-winner of the Juilliard Organ Concerto Competition. Mr. D’Agostino has been on the faculty of Juilliard and Mannes The New School for Music, and serves as Organist and Director of Music at St. Ann & the Holy Trinity in New York.