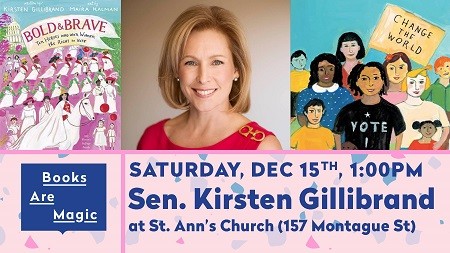 Here are the stories of ten leaders who strove to win the right to vote for American women—a journey that took more than seventy years of passionate commitment. From well-known figures, such as Susan B. Anthony and Sojourner Truth to lesser known women such as Alice Paul and Mary Church Terrell, these are heroes who dreamed big and never gave up. Senator Gillibrand highlights an important and pithy lesson from each woman’s life—from “dare to be different” to “fight together.”

On the eve of the one-hundredth anniversary of the Nineteenth Amendment, which granted women suffrage, Bold & Brave looks both backward and forward. It introduces children to strong women who have raised their voices on behalf of justice—and inspires them to raise their own voices to build our future.

With gorgeous illustrations by renowned artist Maira Kalman, this is a book that will inspire and uplift, a book to be cherished and shared.

Kirsten Gillibrand is one of New York’s Senators and a passionate advocate for girls’ and women’s rights like her mother, grandmother, and great-grandmother before her. Senator Gillibrand was born and raised in upstate New York. She lives there with her family: her husband, Jonathan, their sons, Theo and Henry, and their dog, Maple. Her book for adults, Off the Sidelines, was a New York Times bestseller, and Bold & Brave is the Senator’s first book for children.

All tickets include a copy of Bold & Brave. Ticket options are available to admit 2, 3, and 4 people on the same ticket.