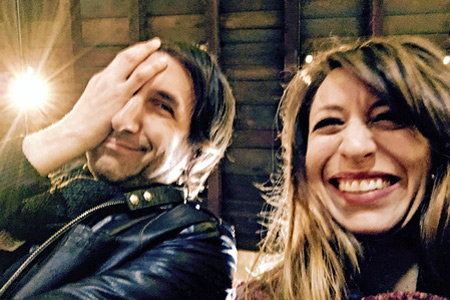 Nick Hallett, composer, performer and cultural producer, and Daisy Press, vocalist and performer, will create an ambient soundscape for voices, drones, and piano at the second annual Summer Concert Series of St. Ann & the Holy Trinity Church, Brooklyn Heights, on Thursday, August 19, at 6:00 pm. The 45-minute concerts take place in the church at Montague and Clinton Streets each Thursday through September 2, 2021. The Forum @ St. Ann’s, the parish’s arts and culture program, is presenting the concert series to benefit St. Ann’s Pop-Up Pantry on its first anniversary.

Nick Hallett operates between the worlds of sound, art, and performance. Since 2014, he has acted as music director of the Bill T. Jones/Arnie Zane Company, in which time he has composed seven evening-length dance scores. He is the recipient of a 2017 “Bessie” award for his work with Ishmael Houston-Jones and Miguel Gutierrez. Hallett’s ongoing collaboration with artist Shana Moulton includes Whispering Pines 10, an opera featuring Daisy Press.

Daisy Press is described by the New York Times as “intrepid” and “passionate.”  She specializes in the music of 12th-century mystic, Hildegard of Bingen and incorporates aspects of North Indian (Hindustani) ragas into unusual and extraordinary interpretations of her compositions. Daisy is the High Priestess of Voice Cult, a vocal community ritual which brings together her many years of study in music, psychology, and theology.

Nick and Daisy have teamed up in a range of cultural contexts, performing at such venues as National Sawdust, New Museum, The Kitchen, SFMOMA, Portland Institute of Contemporary Art, ISSUE Project Room, Roulette, and BOFFO, among others.