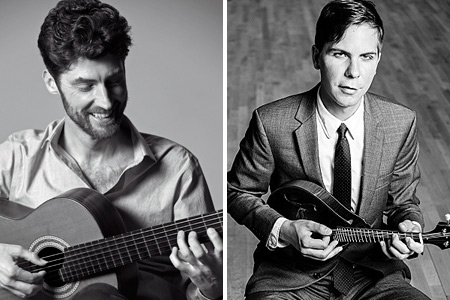 The Stephen Guerra Duo, Stephen Guerra, guitar, and Grant Ziolkowski, bandolim, will play originals and standards of Brazilian instrumental music at the final concert of the Summer Concert Series of St. Ann & the Holy Trinity Church, Brooklyn Heights, on Thursday, September 2, at 6:00 pm. The 45-minute concerts take place in the church at Montague and Clinton Streets each Thursday through September 2, 2021. The Forum @ St. Ann’s, the parish’s arts and culture program, is presenting the concert series to benefit St. Ann’s Pop-Up Pantry on its first anniversary,

Guerra has a Ph.D. in music theory from Yale University, has published research articles about rhythm and meter in Latin-American African-diasporic music and has taught music at UMass Amherst, Northern Arizona University, Rutgers University, and Yale University. Guerra is the Executive Director of the Bronx Conservatory of Music.

Originally from Wisconsin, Grant Ziolkowski began playing mandolin and singing at a young age. His musical pursuits have carried him from classical music to jazz, bluegrass and old-time, and later to the diverse styles of Spain, Argentina and Brazil. Grant has toured throughout the United States and Europe with Chicago bluegrass outfit, The Henhouse Prowlers. He then taught and worked at the Old Town School of Folk Music, a Chicago music and arts non-profit. Grant released Rodeway in July 2014, a showcase of original compositions featuring an all-star cast of Chicago bluegrass musicians. The tuneful newgrass EP runs the modern bluegrass gamut, from crooked Celtic tunes to Chicago hard grass to a dream-like waltz. Since moving to New York City, Grant has focused his efforts on Brazilian choro music, playing regularly with the Regional de New York, teaching mandolin and traveling to Brazil to study with the masters.