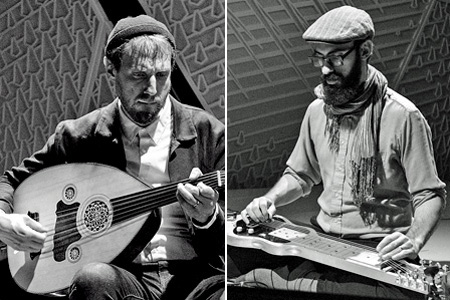 Sandcatchers bandleader Yoshie Fruchter, oud player, and band member Myk Freedman on the lap steel will perform a blend of Near Eastern Classical and Americana at the second annual Summer Concert Series of St. Ann & the Holy Trinity Church, on Thursday, July 1, at 6:00 pm. The 45-minute concerts take place in the church at Montague and Clinton Streets, Brooklyn Heights, each Thursday through September 2, 2021. The Forum @ St. Ann’s, the parish’s arts and culture program, is presenting the concert series to benefit St. Ann’s Pop-Up Pantry on its first anniversary.

Oud player and songwriter Yoshie Fruchter is a student of the Armenian American oud virtuoso Ara Dinkjian and has made his mark with a style of playing and composing all his own. A Canadian pioneer of the lap steel, Myk Freedman studied at the New School and has created a unique sound on the instrument. From sweeping melodies to sound effects, Myk’s is truly a singular voice.

Yoshie Fruchter is a guitar, bass and oud player whose playing and composing combines a unique blend of rock, jazz, experimental, and Jewish styles. His latest project, Sandcatchers, in which he plays oud and is joined by lap steel player Myk Freedman and Erik Friedlander on cello, explores the sounds of the Middle East combined with the American South. He has released two additional albums and played on others. A Brooklyn resident, Fruchter is a sought-after freelance musician and has performed extensively in the U.S. and Europe.

Toronto native Myk Freedman is a composer, leader and performer, an active member in the Brooklyn creative music scene. He can regularly be heard in various projects and ad hoc ensembles led by local luminaries. Freedman has performed with John Zorn, William Parker, Elliot Sharp and many others, and his compositions have been recorded by his own groups as well as by The MK Groove Orchestra, In a China Shop, and Laila and Smitty.

Concert-goers are asked to donate food items or make a financial donation to St. Ann’s Pop-Up Pantry. The program was launched in June 2020 in response to the increased food insecurity in Brooklyn resulting from the COVID-19 pandemic. The program quickly evolved, giving away ever increasing amounts of non-perishable and fresh groceries as the lines of guests grew longer. To date, St. Ann’s Pop-up Pantry has provided over 9,000 people with nutritious foods, and the need shows no sign of stopping.

All are urged to combine their love of music and the desire to help our neighbors in need by attending the Summer Concert Series benefiting St. Ann’s Pop-up Pantry.