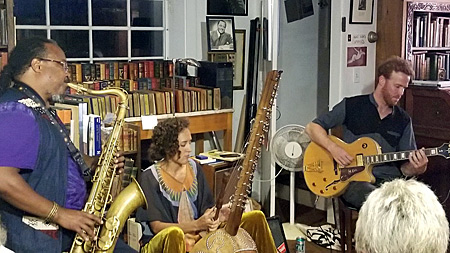 The 45-minute concerts take place in the church at Montague and Clinton Streets each Thursday through September 2, 2021. The Forum @ St. Ann’s, the parish’s arts and culture program, is presenting the concert series to benefit St. Ann’s Pop-Up Pantry on its first anniversary.

Althea SullyCole is an ethnomusicologist and multi-instrumentalist from New York City. She has studied her primary instrument, the kora, a 21-stringed harp from the Mandé region of West Africa, for ten years, three of which were spent in Dakar, Senegal, with masters Edou Manga and Yacouba Sissoko, among others. In addition to her solo work, she has performed with many musical groups at venues such as Royal Albert Hall, the Apollo Theatre and the John F. Kennedy Center for the Performing Arts. She is currently a doctoral candidate in Ethnomusicology at Columbia University and the Sylvan C. and Pam Coleman Memorial Fund Fellow in the Musical Instruments Department at the Metropolitan Museum of Art.

Concertgoers are asked to donate food items or make a financial donation to St. Ann’s Pop-Up Pantry. The program was launched in June 2020 in response to the increased food insecurity in Brooklyn resulting from the COVID-19 pandemic. The program quickly evolved, giving away ever increasing amounts of non-perishable and fresh groceries as the lines of guests grew longer. To date, St. Ann’s Pop-up Pantry has given away more than 10,500 bags of nutritious food, and the need shows no sign of stopping.