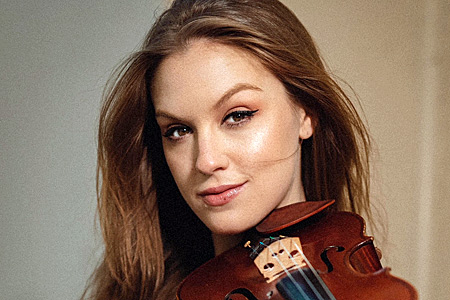 Molly Fletcher, violinist, will perform at the second annual Summer Concert Series of St. Ann & the Holy Trinity Church on Thursday, July 22, at 6:00 pm. The 45-minute concerts take place in the church at Montague and Clinton Streets in Brooklyn Heights each Thursday through September 2, 2021. The Forum @ St. Ann’s, the parish’s arts and culture program, is presenting the concert series to benefit St. Ann’s Pop-Up Pantry on its first anniversary.

Molly Fletcher is an internationally performing violinist with a unique career centering her in both the music and fashion realms. She has toured with a range of artists from Clean Bandit to Fetty Wap, collaborated with Paul Simon, Kygo, Lewis Capaldi, Louis Tomlinson of One Direction, and Jessie Reyez, to name a few. A classically trained violinist with a dual degree in Violin Performance and Psychology from New York University, she’s a member of several New York-based orchestras and chamber ensembles, and was recently a soloist with The Chelsea Symphony performing the Bruch Violin Concerto. Fletcher has also graced the stages of many of the city’s iconic venues, including Carnegie Hall, Lincoln Center, Broadway, and is a frequent violinist on the Tonight Show. You can listen to her debut solo album “Reverie” wherever music is streamed. Also a runway model, Molly Fletcher has appeared on Project Runway, New York Fashion Week and Vogue Online,

Concertgoers are asked to donate food items or make a financial donation to St. Ann’s Pop-Up Pantry. The program was launched in June 2020 in response to the increased food insecurity in Brooklyn resulting from the COVID-19 pandemic. The program quickly evolved, giving away ever increasing amounts of non-perishable and fresh groceries as the lines of guests grew longer. To date, St. Ann’s Pop-up Pantry has given away some 10,000 bags of nutritious foods, and the need shows no sign of stopping.