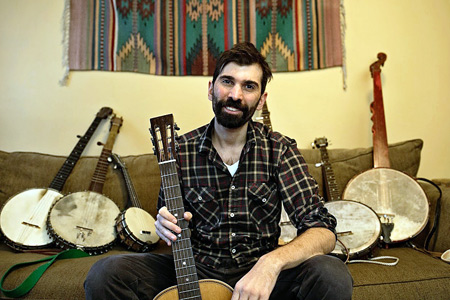 Eli Smith, folk singer, banjo player and guitarist will perform at the second annual Summer Concert Series of St. Ann & the Holy Trinity Church and Pro-Cathedral, Brooklyn Heights, on Thursday, August 12, at 6:00 pm. The 45-minute concerts take place in the church at Montague and Clinton Streets each Thursday through September 2, 2021. The Forum @ St. Ann’s, the parish’s arts and culture program, is presenting the concert series to benefit St. Ann’s Pop-Up Pantry on its first anniversary.

Smith grew up in New York’s Greenwich Village. He has recorded for Smithsonian Folkways Recordings and regularly performs as a solo musician and with the string band the Down Hill Strugglers. He has performed and recorded with John Cohen (New Lost City Ramblers) and Peter Stampfel (The Holy Modal Rounders and The Fugs) and has opened for songwriters Patti Smith and Steve Earle. Smith can be heard singing “The Roving Gambler” on the soundtrack to the Coen Brothers’ film Inside Llewyn Davis. Eli Smith has performed at festivals and venues including the Kennedy Center, Library of Congress, Newport Folk Festival, Vancouver Folk Festival, The Jalopy Theatre and many more.