The Constitution, a Secular Oratorio 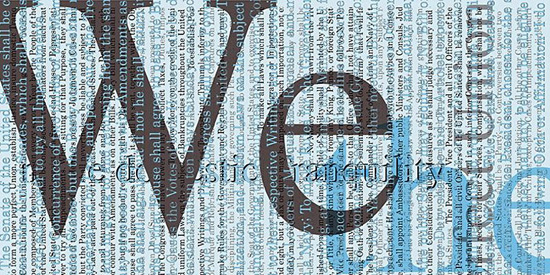 Aside from the Declaration of Independence, no text epitomizes American ideals as much as the Constitution. Acknowledging the Constitution’s embodiment of 18th century values and language, the composer Ben Yarmolinsky has chosen a corresponding 18th century musical style, the Handelian oratorio, as the model for his setting of The Constitution. The work comprises choruses, arias, and recitatives, similar to the Messiah, but with a recognizably American sound that combines jazz rhythms, blues, folk, gospel, as well as Handelian flourishes to give voice to the Constitution’s iconic words in a clear, vigorous, and highly singable style. People might leave our performances humming an amendment or two!

Benjamin Yarmolinsky has lived and worked in New York since 1982. He has composed hundreds of works, including operas, chamber music, choral music, musical theater works, orchestral music, film scores, and songs. He is also a classical guitarist and singer and has performed extensively in those capacities. His most recent works include The Constitution: a secular oratorio; Pentagrams, a chamber work for flute, guitar and piano; The Trial of Anna, an opera based on the 2015 trial of Dr. Anna Stubblefield; The Yarmolinsky Variations, a 50-minute video; and Americana, a program of American folk song arrangements for solo guitar.

Before graduating from Harvard University in 1977, Yarmolinsky spent two years in Paris, studying with the legendary Nadia Boulanger. From 1978 through 1982, he lived in Morocco where he taught music at the American School of Tangier, immersed himself in the local music, and was friendly with composer Paul Bowles. On returning to New York, he studied at the City University of New York where he earned his Ph.D. in music composition. In 1989, he was one of the founders of Friends & Enemies of New Music. He currently holds a position of Professor of Music at the City University of New York’s Bronx Community College campus.

About the Vertical Player Repertory:

We Take Opera to Another Place – Vertical Player Repertory creates ensemble-driven opera theatre in extraordinary venues, bringing theatrical integrity and an unconventional spirit to an eclectic mix of repertoire, in settings that have ranged from a factory courtyard on the Gowanus Canal to the last active shipping port in Brooklyn. A pioneer of the indie opera movement, VPR’s unique vision and adventurous use of place invite both performer and audience to re-imagine the great possibilities of opera.