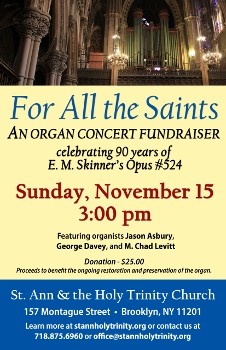 A rousing concert, “For All the Saints,“ to celebrate the 90th birthday of the treasured Peabody Memorial Organ in St. Ann & the Holy Trinity Church will take place on Sunday, November 15, at 3:00 pm.

The event will raise funds to support the continued restoration and maintenance of the organ. Suggested donation is $25.00 at the door, or contact office@stannholytrinity.org for reservations.

Their musical selections will make full use of the versatility and instrumental sounds of the instrument. The program includes works by composers including Alexandre Guilmant, Jean Langlais, Dieterich Buxtehude, Johann Sebastian Bach, and David Cherwien. Noted soprano Korin Kormick will perform an aria from Richard Wagner’s Tannhauser accompanied by Mr. Levitt.

The E.M. Skinner organ was a gift to the church, made in 1925 by George Foster Peabody in memory of his brother Charles. It has a rich history, having been played by some of the most highly regarded musicians of the Episcopal Church and numerous other organists of note. With 4,718 pipes ranging from 2 inches to 32 feet in length, it is the largest, essentially unchanged Skinner organ in New York City. In 1999, the Organ Historical Society deemed it “An Historic Instrument of Special Merit,” the musical equivalent of landmark status.

In the 1990s, after the organ had fallen into disrepair, a successful restoration effort was undertaken. Fundraising to date has made it possible to address many longstanding problems. However, much still remains to be done to restore the organ to full playable and original condition.

George Davey holds a Bachelor of Music degree from Atlantic Union College and a Master of Sacred Music degree from Boston University. In addition to his position at St. George’s church, he is Organist and Choral Director at Ephesus Seventh Day Adventist Church in Harlem. He has accompanied many choral ensembles locally and internationally, including appearances in Australia and New Zealand, and at The Washington National Cathedral, Grace Cathedral in San Francisco, the Cathedral of St. John the Divine and Carnegie Hall in New York City.

Jason Asbury is active as a concert organist, conductor and choral accompanist in the New York City metropolitan area. He has taught at Saint Ann’s School for seventeen years and recently completed seventeen years as Director of Music at Prospect Presbyterian Church in Maplewood, New Jersey. He has performed as a solo recitalist in many venues including St. Patrick’s Cathedral and the Cathedral of St. John the Divine in New York City, Augustinerkirche in Vienna, Austria, and the Princeton University Chapel.

M. Chad Levitt has a Master’s degree in Organ Performance from the Manhattan School of Music. His undergraduate studies were at Stetson University and Rollins College, Florida. He has served as organist, choir director and coordinator of other music programs at churches in Florida, Westchester County and the Bronx. Mr. Levitt has played recitals at the National Cathedral in Washington, Church of the Advent in Boston, and Saint-Croix de Bordeaux in Bordeaux, France.