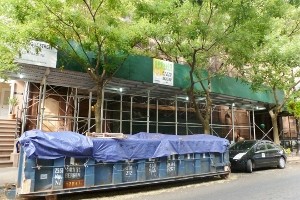 St. Ann & the Holy Trinity has received a grant of $10,000 from the New York Landmarks Conservancy’s Sacred Sites Program for our project to restore the brownstone façade and roof of the Parish House building on Montague Street adjacent to the sanctuary.

St. Ann’s Rector, the Rev. John E. Denaro, stated in response to the award, “We are very grateful to the Conservancy for its partnership and support of our restoration project, which will preserve the building for many more years of active use by the parish and community.  The Conservancy is unique in recognizing how much these grants mean to congregations entrusted with stewardship of historic buildings.”

The Conservancy grant announcement described conditions that necessitated the grant:

The site visit confirmed that the brownstone façade is dangerously deteriorated, shedding large sections of projecting trim; roofs are actively leaking and temporarily patched and tarped; wood windows are severely deteriorated, and the large parish hall wing and formerly fully leased community spaces are suffering from active leaks, plaster failure, and weather infiltration as a result of the ongoing deterioration of the exterior envelope.

Restoration of the façade is in full swing though it is somewhat obscured by the sidewalk scaffolding and webbing. Workers are cleaning and restoring stonework, replacing windows, and fixing the roof. Completion of the $1.8 million project is expected by the end of the year. This work will require the church to spend down most of the capital funds it has in reserve, while it also seeks to augment its limited operational funds.

News of the grant was covered by Francesca Norsen Tate, Religion Editor of the Brooklyn Daily Eagle. See her August 21, 2014 article here.