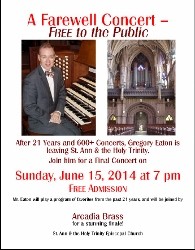 Gregory Eaton, Organist and Director of Music at St. Ann & the Holy Trinity Church for 21 years, will present a Farewell Concert to honor and thank the many people who have supported his Wednesday lunchtime recitals, numerous fundraising concerts and music ministry over the years. Through his efforts, Mr. Eaton has raised hundreds of thousands of dollars in support of the maintenance and restoration of the historic church and landmark E.M Skinner organ he plays. The concert is open and free to the public. A reception will follow the concert.

Mr. Eaton is well known for his mastery of the organ and his superb musicianship. He has composed both sacred and secular works for organ and choir and has arranged and transcribed orchestral and chamber works. His popular transcriptions of music by Scott Joplin have been published. Mr. Eaton is an accomplished choir conductor and has led church choirs, including St. Ann’s, each Sunday in performing a rich and varied musical liturgy.

The program will include favorites that have delighted Mr. Eaton’s audiences and reflect his wide-ranging musical repertoire of over 600 musical works from the 15th century to the present.

The concert will conclude with a dramatic finale as the Arcadia Brass Ensemble and percussionist Ed Gonzalez join Mr. Eaton in performing the Craig Phillips suite.

Gregory Eaton came to St. Ann & the Holy Trinity Church in 1993 as Director of Music and Organist. From 2009 to 2012 he served as Dean of the Brooklyn Chapter of the American Guild of Organists. He is a graduate of the University of Redlands, California, and came to New York in 1984 to join the music staff of Trinity Church, Wall Street. After two years at Trinity, he served as Director of Music at the Church of the Epiphany in Manhattan before coming to St. Ann’s. Mr. Eaton was also Lecturer in Church Music of the General Theological Seminary from 1984-2006. In addition to his church music activities, he is, with David Hurd, one of the co-founders of Chelsea Winds recorder ensemble.