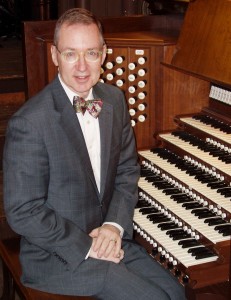 Gregory Eaton served as Director of Music and Organist of St. Ann & the Holy Trinity Church in Brooklyn Heights from 1993 to 2014. At St. Ann’s he played the landmark E.M. Skinner organ of 1925, and could be heard most weeks of the year in the church’s weekly organ recital every Wednesday at 1:10 pm. As of June 2014, he had played over 616 recitals at St. Ann’s, covering over 600 works from more than five centuries of organ literature.

In addition to the standard organ repertoire, Gregory highlights both contemporary music and music by American composers. Following the lead of his teacher Leslie Spelman (author of the original Organ Plus), he also regularly performs music for organ and other instruments.

A graduate of the University of Redlands, California, his major teachers have been Eva Clover in piano, Jeffrey Rickard in conducting, and Dr. Leslie Spelman in organ. An invitation to join the music staff of Trinity Church, Wall Street, brought Gregory to New York in 1984. At the same time, he was hired by the General Theological Seminary, where he was Lecturer in Church Music until 2006, and served again as sabbatical Director of Chapel Music in 2008. After Trinity Wall Street, he served as Director of Music of the Church of the Epiphany in Manhattan, prior to accepting the position at St. Ann & the Holy Trinity. Mr. Eaton is a member of the American Guild of Organists. In the Brooklyn Chapter of the AGO, he has served as a member of the Executive Board, three terms as Sub-Dean, and three terms as Dean.

Gregory has served as a guest conductor for various choral ensembles, in both New York City and Long Island. In 2009 he was chosen to be the musical director for the ordination of the current bishop of Long Island, Lawrence Provenzano. This involved recruitment, coordination, and rehearsal of a choir of nearly 200.

In addition to his church music activities, Gregory Eaton is also, with David Hurd, one of the co-founders of Chelsea Winds recorder ensemble, and an occasional composer of both sacred and secular music.  He enjoys reading, cooking, photography and hiking, especially in the wide open spaces of the American Southwest. 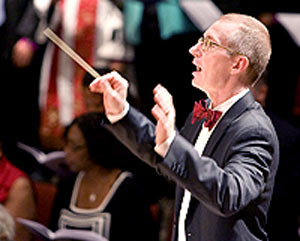 Tribute to Gregory Eaton, Director of Music and Organist, St. Ann & the Holy Trinity Church
At his Farewell Concert on Sunday,
June 15, 2014
By Frank Kain

I’ve been asked to add a few remarks to tonight’s proceedings in part, I suspect, because of my long association with the man of the hour, Gregory Eaton. I served on the search committee whose efforts resulted in Gregory’s appointment to the position of Parish Music Director 21 years ago. From the first notes of his audition performance I knew that he was the one who would understand and care for our beloved Skinner pipe organ. It takes a person of special talent and sensitivity to master the resources of this incredible instrument. I’m sure you’ll agree with me that Gregory possesses those qualities in abundance. In addition I’ve sung in his choirs and I’m part of the organ curatorial team at the Randolph Organ Company.

In his sermon this morning our Rector, Fr. Denaro, spoke eloquently of Gregory’s tenure here at St. Ann & the Holy Trinity. He alluded to Gregory’s attention to the relationship between the scriptural subjects of each week’s liturgy and the musical illumination of those subjects. Those who have faithfully attended Gregory’s Wednesday concerts can attest to his mastery of the widest variety of musical styles and to his creative program design. Tonight’s performance is no exception.

Behind the scenes, however, Gregory’s contributions to our parish have made it possible for us to survive through some particularly difficult times. In his part-time position as Parish Administrator he organized many of the day-to-day operations of the parish and shepherded a succession of staff members through the process of running our church.

Gregory also took it upon himself to see to the maintenance and restoration of the historic E.M. Skinner pipe organ you hear tonight. Throughout his tenure he has seen to the improvement of an instrument that was considered fundamentally unplayable when he arrived. Over time virtually every section of the organ has received attention, varying from careful cleaning to wholesale restoration. The work he started will continue, we hope, as we develop our ‘Tower and Organ Restoration Fund’. The entire instrument will have to be removed while the interior and exterior of the tower is restored. While removed the completion of the organ restoration project will be carried out so that when the tower work is completed the organ will be reinstalled in its fully restored condition. This is an ambitious goal. It is the next big project to be undertaken here at St. Ann’s. Your prayers and your assistance are greatly appreciated.

Back to his musicianship, though. Not only is Gregory an amazing service player, choir conductor and concertizer – he has contributed a large number of his own compositions to the body of liturgical works available to the larger church community. Several of those compositions have been premiered right here by our own parish choir, and we’ve all delighted in his magnificent editions of Scott Joplin’s rags arranged for performance on the organ.

In his time with us Gregory Eaton has worn many hats and, indeed, many shoes. Both will be hard to fill. Our prayers are for a fruitful and interesting life journey as he moves ahead. He will be missed, but fondly remembered.

Now, on with the show… 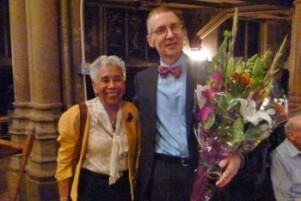 Photos of the Farewell Concert can be seen here.
Read “An Appreciation of Gregory Eaton de Weever,” by Jacqueline de Weever, and “Notes from the Console,” by Gregory Eaton, which appeared in the May 25, 2014 issue of The Good News, the newsletter of St. Ann & the Holy Trinity Church.