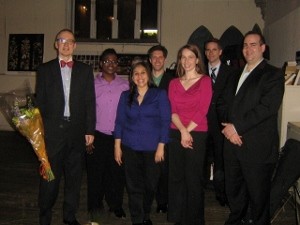 [/frame_left]“Heroic Flourishes 2: Music for Organ and Brass” drew an appreciative crowd to St. Ann & the Holy Trinity Church on the evening of Sunday, May 13. Organist Gregory Eaton, three trumpets, a French horn, two trombones, a tuba and timpani presented a varied and heroically resounding program of music by Bonelli, Dupré, Gigout, Hurd, Phillips, Strauss, and others.

Concert proceeds will help to fund studies needed to plan the next phase in the preservation of the historic landmark building—the restoration of the church’s 112-foot tower and the organ, which is housed inside the tower. Restoration work on the tower will therefore require removal of the 4,718 organ pipes, which in turn will facilitate continued restoration of the 1925 instrument.

“Fanfare and meditative works showcased the grandeur of the landmark E.M. Skinner Organ at St. Ann & the Holy Trinity Church last Sunday. Titled ‘Heroic Flourishes,’ the concert launched a new fundraising project for the next and then final stages of the instrument’s restoration, one that it is believed will benefit the entire neighborhood. . . .

“The proceeds from the May 13 concert launch a double-maintenance project that will enable the restoration team to access parts of the organ that have received no upkeep, because other components must first be removed from the organ chamber. This will in turn give access to the church’s tower, which must undergo waterproofing, pigeon-proofing and refurbishing.”

Read the entire article in The Brooklyn Eagle.

As noted in the concert program, St. Ann’s looks forward to the day when the protective scaffolding in front of the church can be removed allowing it to be viewed without obstruction for the first time in over two decades.