The Church of the Holy Trinity The National Historic Landmark church now known as St. Ann & the Holy Trinity was built as The Church of the Holy Trinity by Brooklyn paper manufacturer Edgar Bartow who wanted a magnificent edifice for the City of Brooklyn, with pews that were rent-free. Construction of the church began in 1844 on the highest point in Brooklyn Heights, which was then sparsely settled with some large merchants’ homes, small homes and shops and a number of unfinished streets and vacant lots. Bartow purchased the site’s eight lots from the nearby estate of Hezekiah B. Pierrepont (his wife’s family).

Bartow chose architect Minard LaFever to design the church and adjoining chapel and rectory, which are considered to be the finest achievement of LaFever’s career. An important example of Gothic Revival architecture in America, the richly ornamented church is notable for its elaborately vaulted roof and extensive suite of stained glass windows by William Jay Bolton. The church’s official opening was on April 25, 1847, although the building was not entirely completed. A 275-foot tower was designed and installed by 1869. Its spire was the most visible landmark in Brooklyn and was used in conjunction with the spire of Trinity Church Wall Street by ship captains to navigate into the New York harbor. The church removed the spire in 1906 because of concern about falling stone and the high cost of maintenance.

The exterior is porous brownstone over a brick core. Inside, the walls are plaster, colored and textured to look like stone. The nave is 145 feet long and 42 feet wide. The intricate fan-vaulted ceiling is 63 feet high. The current altar, brass chancel rail, pulpit, reredos, and chancel tiling were part of an 1899 renovation.

During the Cold War in the 1950s, there was dissension within the congregation, accusations were made against the assistant rector, and differences with diocesan authorities grew, which eventually led to the dissolution of the church in 1957. The building was closed and stood mostly vacant for more than a decade.

In 1969, nearby St. Ann’s Church, the oldest Episcopal congregation in Brooklyn, sold its property to The Packer Collegiate Institute next door and was permitted to move four blocks into the long-empty Holy Trinity building. St. Ann’s took the new name of St. Ann & the Holy Trinity in honor of the building’s heritage.

Today’s parishioners continue the life of a body of faithful Episcopalians who have worshiped in Brooklyn for more than 240 years, first gathering during the American Revolution. At that time, a group of Anglican-minded neighbors in the Village of Brooklyn wanted to hold services of their own rather than attend the Dutch Reformed church. They first met in the living room of Joshua and Ann Sands on Sunday, April 5, 1778. The congregation then moved to larger quarters in John Middagh’s barn in 1784 and formally organized as the Episcopal Church of Brooklyn in 1787. In 1795, the parish obtained its own building at Washington Street in what is now Dumbo and reorganized as St. Ann’s Church, named for its benefactor Ann Sands.

In 1869, plans for the Brooklyn Bridge called for use of the church’s property and burial ground. The church moved to Clinton and Livingston Streets in what is now Brooklyn Heights, and allotted its burial plots to Green-Wood Cemetery in Brooklyn and The Evergreens (Cemetery of the Evergreens) in Queens. Plots remain available today. For inquiries, contact us using the form at the bottom of this page.

The Diocese of Long Island was created on November 18, 1868, at a convention held in the sanctuary of the Church of the Holy Trinity. The church served as pro-cathedral of the Diocese of Long Island from 1868 until 1885, when the Cathedral of the Incarnation was opened and became the diocesan seat. The Reverend Abram Newkirk Littlejohn, rector of the Church of the Holy Trinity, was elected the first Bishop of the new diocese. Bishop Lawrence Provenzano again designated the church as pro-cathedral during a festive Evensong service at St. Ann & the Holy Trinity on September 16, 2018. The designation indicates both historical and pastoral significance. In its role as pro-cathedral, the church will serve as a place in which the bishop of the Episcopal Diocese of Long Island can speak directly to the concerns of parishioners in Brooklyn and Queens, the two New York City boroughs that are part of the diocese. Read more.

A 360° panoramic view of the interior of St. Ann & the Holy Trinity Church

Jeremy Seto made this 360° panorama of St. Ann & the Holy Trinity Church’s interior on a May 22, 2016, visit to the church and has generously shared it with us. 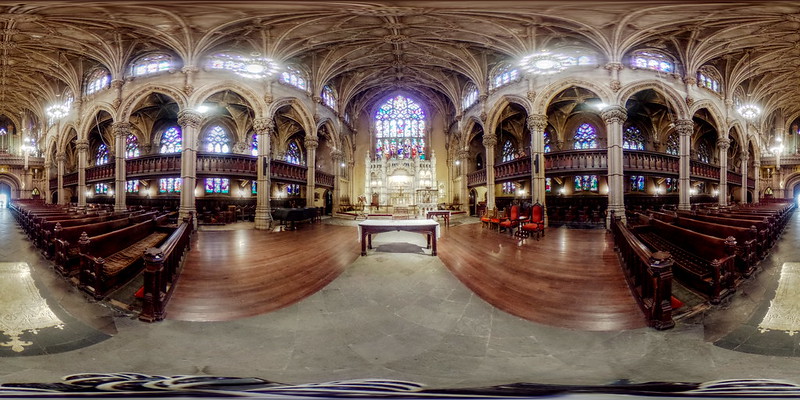