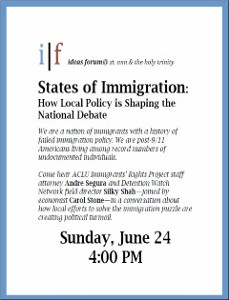 [/frame_left]The community is invited to attend a presentation entitled States of Immigration: How Local Policy is Shaping the National Debate on Sunday, June 24, 2012, at 4:00 p.m.

The event will launch the historic parish’s new “Ideas Forum,” an ongoing series intended to spark dialogue and understanding on important topics of the day.

This forum’s discussion will focus on how local efforts to solve the immigration puzzle in states and communities across the country are creating political turmoil. The subject is timely as the nation awaits a June decision by the U.S. Supreme Court of a Federal challenge to Arizona’s controversial immigration law SB 1070. The fate of similar laws passed in five other states will be affected by this decision.

As noted in the forum announcement, “We are a nation of immigrants with a history of failed immigration policy. We are post-9/11 Americans living among record numbers of undocumented individuals.” States of Immigration will explore the test to our nation’s tradition of welcome to those in search of a new life and dependence on immigrant labor in light of increased security concerns and divisive politics.

• Silky Shah, field director for the Detention Watch Network, a national coalition of organizations and individuals working to reform the U.S. immigration detention and deportation system.

They will be joined by:

• Carol Stone, Economist and author of Ways of the World, a weekly column for The Geranium Farm.

The speakers will be introduced by St. Ann & the Holy Trinity’s priest-in-charge, the Rev. John E. Denaro, who will also facilitate a question and answer session following the presentations. Admission is free. Donations to the ongoing restoration of the 19th century landmark church are welcome. For more information, call 718-875-6960.