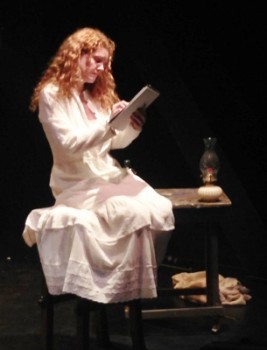 Following a recent successful New York run at Theater for a New City and tour, the new play Muse, written by and starring St. Ann’s own Kristin Lundberg, will be performed at our church on Friday December 5, at 8:00 pm.

In the two-person drama set in 19th century London at the height of the renowned Pre-Raphaelite Brotherhood, Lundberg plays Elizabeth Siddal, model and muse for Dante Gabriel Rossetti, played by Greg Pragel. Their behind the scenes art world romance turns cold as Siddal, famous as the model for Sir John Everett Millais’ painting of Shakespeare’s Ophelia, emerges as an artist in her own right. The 70-minute production is directed by Jay Michaels.

The play, Jay Michaels and Lundberg have received strongly positive reviews. Muse also ran in South Carolina in September and is scheduled for a theater in Washington in April 2015.