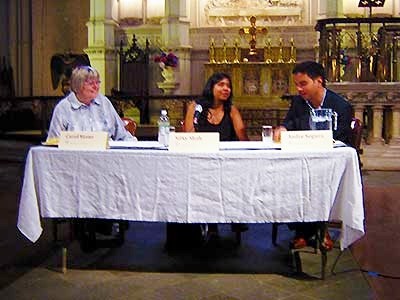 States of Immigration: How Local Policy is Shaping the National Debate kicked off St. Ann’s new Ideas Forum series with an energy driven by a sense of history in the making. The inaugural event on Sunday, June 24, was held one day before the Supreme Court issued its decision on the U.S. case against the controversial Arizona law SB1070.

A panel of three speakers presented a variety of perspectives and issues underlying the current debate over the Arizona law and immigration in general, including the rights of the undocumented, detention and deportation, and the challenges by states to the federal jurisdiction to enforce immigration policy. The distinctive backgrounds and experience of the presenters made for a rich discussion.

• Andre Segura, a staff attorney with the ACLU Immigrants’ Rights Project, has been front and center on the ACLU’S legal challenges to state laws in Arizona and five other states that have passed similar legislation. Segura clarified some legal terms and conditions as well as setting out aspects of the contested laws. He headed straight for Washington, DC, following the forum to be part of the ACLU response to the Supreme Court decision due the next day.

• Silky Shah is a Field Director of the Detention Watch Network, a national coalition of organizations and individuals working to reform the U.S. immigration detention and deportation system. She traced the dramatic growth in number of individuals detained over the past two decades, especially since 9/11, the increase in our use of private detention facilities, the lack of public oversight and the expanded role of law enforcement.

• Carol Stone, a senior economist in research at Haver Analytics and a St. Ann’s parishioner, provided a context through federal data, examples of choices faced by employers who wish to employ workers from abroad, including their ability to verify immigration status through the federal E-Verify database. She noted that the issues the three speakers covered crossed party lines and held out the hope that solutions could be found by working together.

The Rev. John E. Denaro, Priest-in-Charge at St. Ann & the Holy Trinity, moderated the forum, asked for questions from the audience and had a few of his own. Those in attendance were engaged and grateful for this forum to take on a hotly debated and significant topic. Father Denaro invited suggestions for subjects of future Ideas Forums.