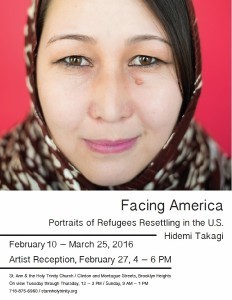 St. Ann’s exhibition, Facing America: Portraits of Refugees Resettling in the U.S, by Hidemi Takagi and presented by The Forum @ St. Ann’s, has received prominent attention from the media, suggesting that the theme is not only timely, but has hit upon an important topic that is especially meaningful to Christians during Lent. Fr. John Denaro, rector of St. Ann’s, and Harry Weil, curator and parishioner, make the connections in these stories.

Francesca Norsen Tate of The Brooklyn Daily Eagle, announced the upcoming exhibition to the community in this review of significant events due to take place in Brooklyn’s houses of worship.

The Episcopal Diocese of Long Island featured the exhibit on its website. Communications director, Denise Fillion, attended the February 27 reception for Hidemi Takagi and posted this video.

The Episcopal News Service also covered the exhibition and examined its message and particularly its resonance with the Christian observance of Lent, in this article.

Brooklyn News 12 aired a visit to the exhibition and an interview with Fr. John Denaro.

In addition, the exhibition received notably thoughtful coverage by The Brooklyn Paper in Face value: Photo exhibit focuses on refugees, which observed:

“Inside a Brooklyn Heights church hangs a series of giant portraits — each an image of a recent refugee to the United States. The ‘Facing America’ exhibit aims to counter scary stories about the asylum-seekers by showing that they are just ordinary people, says the photographer behind the images.”

All are encouraged to visit.