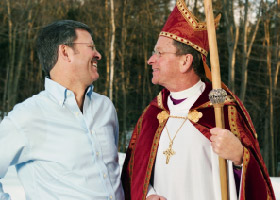 St. Ann & the Holy Trinity will host a special LGBT Pride Month event, the screening of “Love Free or Die.” This Sundance award-winning documentary is about the Rt. Rev. V. Gene Robinson, whose election as the first openly gay bishop in the Episcopal Church was cause for celebration and controversy throughout the Anglican Communion.

“Love Free or Die” follows Gene Robinson from his 2008 civil union, to the Lambeth Conference that same year, to Barack Obama’s inauguration, to the fight for gay marriage in New Hampshire, to the 2009 Episcopal General Convention, and up to the May consecration of the second openly gay Episcopal Bishop, Mary Glasspool.

A suggested donation of $10 is requested for the screening. Please join us!