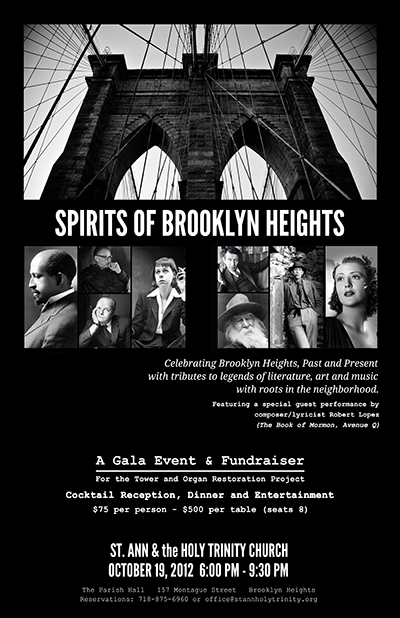 Spirits of Brooklyn Heights will celebrate neighborhood greats on Friday, October 19, 2012, from 6:00 pm to 9:30 pm, at St. Ann & the Holy Trinity Church. The festive gala, to benefit the landmark church’s tower and organ restoration project, will honor legends of literature, art and music with roots in Brooklyn Heights who shaped a legacy for Brooklyn as a cultural center.

Tributes to the likes of Walt Whitman, Truman Capote, Carson McCullers and Gypsy Rose Lee, will feature performances by composer/lyricist Robert Lopez (The Book of Mormon, Avenue Q) and other talented artists. Cocktails from 6:00 pm to 7:00 pm will kick off the spirited evening in the sanctuary of the historic building, followed by dinner, entertainment and a silent auction in the Parish Hall. Tickets are $75 and tables of eight are $500.

The church, which opened its doors in 1847, lies at the heart of Brooklyn Heights at Montague and Clinton Streets. A cornerstone in the historic development of the community, it remains an active house of worship and a venue for numerous musical and cultural events. While there has been significant restoration of the building, structural improvements to the tower on Clinton Street and the magnificent organ it houses are now a major focus for continuing restoration.

Joining Robert Lopez, who will appear with his wife Kristen Anderson-Lopez, Jen Chapin, the widely acclaimed singer of “urban folk soul” will perform from her own songbook and that of her legendary father, Harry Chapin, and Broadway and Off-Broadway actor Michael Winther (Songs from an Unmade Bed, Mamma Mia!) will sing from jazz great Fred Hersch’s song cycle of Walt Whitman’s “Leaves of Grass.” Over a dozen other local performers will bring to life prose, poetry and music written in or inspired by Brooklyn.

Information and tickets are available at 718-875-6960 or office@stannholytrinity.org