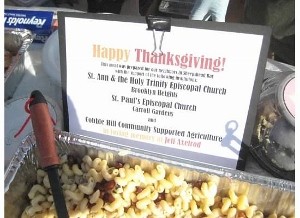 [/frame_left]It was a blessed convergence of need, resources and goodwill.

St. Ann & the Holy Trinity had been collecting donations from our congregation and community for those hard-hit by Hurricane Sandy. Some went together to Far Rockaway for a day of volunteering at a relief center. And our church organized a benefit concert to support the impressive and ongoing relief efforts of Occupy Sandy.

But as basic needs were being assessed in the immediate aftermath of the storm, the reality of Thanksgiving just weeks away loomed large here. We determined that folks who suffered so much loss should not miss the holiday too, and out of our shared intention came the Thanksgiving Project.

As it happened, Cobble Hill Community Supported Agriculture (CHCSA), which had been operating out of the parish hall at St. Ann & the Holy Trinity since August, was looking for a beneficiary of produce and funds donated in memory of a beloved deceased member. The yield from the CHCSA offering was a supply of turkeys, sweet potatoes, apples and apple cider that would become the basis of a traditional Thanksgiving dinner. When St. Paul’s Church on Carroll Street offered the use of their ovens, some big-hearted parishioners there also offered to prepare additional fixin’s and help deliver the meal. The two parishes figured out how to make enough to feed 150 people. They and volunteers identified through Halstead Realtors on Montague Street organized a caravan to pick up and drop off the goods. All we lacked were recipients.

Then, less than a week before Thanksgiving, a contact at Occupy Sandy suggested that folks in Sheepshead Bay in South Brooklyn who were dramatically affected by the storm were not on the news media radar. A single phone call led us to Yelena, a Sheepshead Bay resident whose mind was set on providing a Thanksgiving for her neighbors. The puzzle was complete.

In the days leading up to Thanksgiving, volunteers from both churches and CHCSA worked together to whip up a feast. And on Thanksgiving Day, on the sidewalk at the corner of Emmons Avenue and Brown Street, Sheepshead Bay residents and their guests from all over Brooklyn embraced a great holiday tradition.

[/frame_right]When over 100 meals were served, there were plenty of leftovers for the rest of the weekend for those still without power and heat.

As hoped, the Thanksgiving Project met a need and became an inspiration for more service.