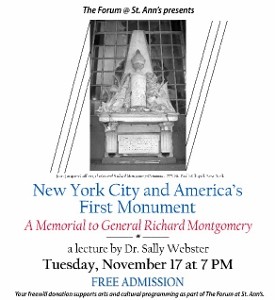 The Forum @ St. Ann’s presents a special lecture by Sally Webster called “The Nation’s First Monument and the Origins of the American Memorial Tradition” on Tuesday, November 17, at 7:00 pm. The lecture is free and open to the public.

Buried deep within the National Park Service’s web site is an unofficial “National Memorials Timeline,” which includes, not surprisingly, the Washington Monument, the Statue of Liberty, and the Lincoln Memorial. First on the list, however, is the unheralded Monument to General Richard Montgomery. Commissioned in January 1776 by the Continental Congress, it resides today on the porch of St. Paul’s Chapel in lower Manhattan and is unarguably America’s first monument.

This lecture will examine the history of the Montgomery monument, the involvement of Benjamin Franklin in its commission in France, its fate during the American Revolution, the designation of New York City as the nation’s first capitol and home to the Montgomery Monument, and the monument’s installation at St. Paul’s by Pierre-Charles L’Enfant, later the designer of Washington, D.C.

Sally Webster, Professor Emerita of Lehman College and the Graduate Center, CUNY, is an authority on historic murals and monuments. The Nation’s First Monument and the Origins of the American Memorial Tradition is her most recent publication. Her other books include Eve’s Daughter/Modern Woman: A Mural by Mary Cassatt and Critical Issues in Public Art, Content, Context and Controversy. She has also written an essay on the history of modern mural painting for the forthcoming Blackwell Companion to Public Art, and a special issue on murals for the journal Public Art Dialogue. Currently, Professor Webster is a writer in residence in New York Public Library’s Wertheim Study.

The Forum @ St. Ann’s presents a program of exhibitions, lectures, concerts and other events that seek to engage the community in conversation about the arts, ideas and civic life.