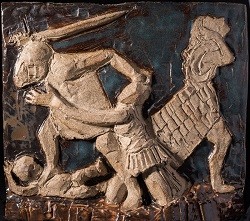 The Forum @ St. Ann’s presents “Dialogues in Depth: Reliefs by Jolie Stahl and Jock Ireland,” an exhibition of bas-relief sculpture on view at St. Ann & the Holy Trinity Church from January 11 through February 11.

Both artists refer to classical paintings as a basis for their work, using the paintings’ compositions and, at times, concepts, to shape their own art. Jolie Stahl’s interest is in a contemporary dialogue with age-old themes and Jock Ireland’s is in the formal and sensory interpretation of classical allegories. Interpretation of the chosen composition poses the challenge for both artists.

Jolie Stahl’s stoneware reliefs are based on such works as The Expulsion (Albrecht Dürer), Judith with the Head of Holofernes (Andreas Mantegna) and Massacre of the Innocents (Nicolas Poussin). Stahl believes that in troubling times the church can serve as a beacon and sanctuary for all, including the disenfranchised. She relates these Old Testament stories to her concerns about contemporary issues, saying, “What could be more explicit to a ‘Muslim ban’ than the shame of being banished from the Garden of Eden? What could be more relevant to women in contemporary society than the story of Judith’s abuse by Holofernes? How can we avoid a conversation about DACA children being deported in relation to the Massacre of the Innocents?”

Jock Ireland has also been working with the narrative themes of classical paintings as a point of departure for his exploration into more formal and abstract themes. Ireland’s works his reliefs in clay before casting them in plaster. He states that “I can really feel the wholeness that comes from the flatness . . . and this abstract/formal stuff informs the content.”

Jolie Stahl is a painter, sculptor, printer and photographer and has worked as a journalist and an anthropologist. She studied painting at the School of the Museum of Fine Arts in Boston, the Institute Allende in Mexico and the Skowhegan School of Painting and Sculpture. As as an artist in New York City, she joined COLAB, a movement dedicated to the opposition to the forces of commercialization and urban gentrification. She has shown her work at Barbara Gladstone Gallery, Artist’s Space, ABC No Rio, the Jack Tilton Gallery, Printed Matter, Lori Bookstein Fine Art and the Hudson Guild, all in New York City. Jolie Stahl.

The Forum @ St. Ann’s is the arts and culture program of St. Ann & the Holy Trinity Church and seeks to engage the wider community through civic discourse, music and the arts.