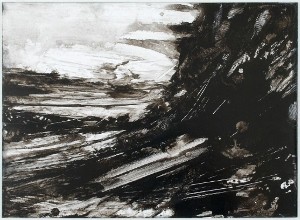 [/frame_left]In the Beginning, an Exhibition of Paintings by Athena LaTocha

St. Ann & the Holy Trinity Church will present In the Beginning, an installation of ink wash paintings by Athena LaTocha, which will be on view in the church September 14 – October 24, 2014. This is the third in an ongoing series of visual art programs that are part of The Forum @ St. Ann’s, which seeks to engage the community in conversation about the arts, ideas and civic life.

An artist’s talk is scheduled on Sunday, September 28, at 2:00 pm, followed by a reception. All of the works on view are for sale, and a portion of the proceeds will benefit future programming at St. Ann’s.

LaTocha chose In the Beginning as the exhibition’s title, based on the forms and gestures in the paintings that evoke both the land and sea. The tension of natural forces and elemental energy is emphasized in the stark expressionistic strokes across white surfaces. LaTocha is partly influenced by memories of Alaska, her birthplace, to which she continually returns to explore the environment. She retains a desire for “looking at tidal forces of nature and human interaction with the earth” often rejecting traditional painting and drawing tools and using “unorthodox tools such as cracked rocks, concrete bricks, and reclaimed automobile tire shreds which I pick up off the sides of highways.” LaTocha explains that this process provides a vehicle for her to approach the image fresh or in a way that demands alternative perspectives to understanding image construction.

The paintings will hang from the balconies of St. Ann’s, encircling the sanctuary and immersing viewers in the energy and movement of her images. The loose, fluid abstract forms are in conversation with the church’s landmark stained glass windows that serve as a backdrop to the installation.