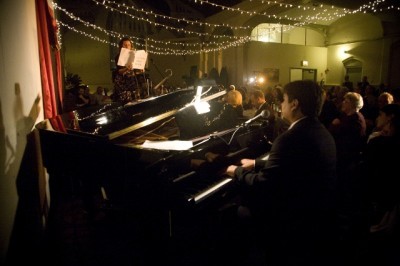 The evening kicked off with a cocktail reception held in a candle-lit sanctuary where attendees gathered to the sounds of Alex Levin on piano. As the crowd swelled, Fr. John Denaro welcomed guests, among them City Councilmember Steve Levin and Congresswoman Nydia Velázquez, both of whom offered words of congratulations and support. All were then treated first to a recitation of Walt Whitman’s “Crossing Brooklyn Ferry”, performed from the galleries by Annie Lanzillotto and a troupe of young actors calling themselves Genuine Risk, followed by pieces by Dudley Buck and Scott Joplin performed by Gregory Eaton on our magnificent E.M. Skinner organ.

The revelry and entertainment continued in the Parish Hall, where a marvelous meal catered by Kevin’s Restaurant in Red Hook was served. The creative contributions of several literary and music legends with roots in Brooklyn Heights were celebrated during two sets of performances.

Local composer and lyricist Janice Lowe and The Jones Twins (Stephanie and Suzanne Jones) performed a piece on which they collaborated: a “mash-up” of writings by Richard Wright, who in the 1940s lived briefly with other renowned authors and artists in the famed “February House” at 7 Middagh Street, and dialogue by the fictional Huxtable Family from the Cosby Show, who, during the series run in the mid-1980s and early 1990s, also had a Brooklyn Heights address.

Jen Chapin, the widely acclaimed singer of “urban folk soul”, also performed two moving pieces, the first by her legendary father, Harry Chapin, which was written by her mother Sandra Chapin, followed by one of her own.

The highlight of the evening came in a finale by special guest performers Bobby Lopez, composer/lyricist of The Book of Mormon and Avenue Q, and his wife, Kristen Anderson-Lopez, who punctuated their opening number, “Let Me Entertain You”, from the musical Gypsy, with one-liners read from an “Episcopal Joke Book” and signed off with a touching lullaby they co-wrote for their two daughters.

Spirits of Brooklyn Heights gave a big boost to a project to restore the tower of our landmark church and the organ housed within it. So many hands and hearts went into the success of this event, which raised $11,000 and brought together members of our parish and many from the community. Special thanks to Bob Mesnard and Jacqueline de Weever of the gala planning committee for a fun evening that will inspire future benefits and celebrations of our church!